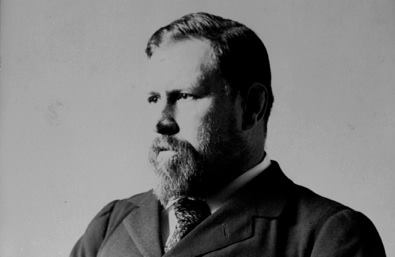 A few doors down from where I work is a boarding house in which Bram Stoker once lodged for a few months before permanently relocating to London, where he would work for much the rest of his life for the celebrated actor Sir Henry Irving. Other than that, the house is notable as being the only building in Dublin with a plaque on it dedicated to Stoker—and, by the way, some think it might not even be the correct building. But that’s a rant for another day.

Anyway, numerous times per day, tour guides passing on buses proclaim from their crackling loudspeakers that Stoker got the name “Dracula” from the Irish phrase “droch fhola“, meaning “bad blood”. Unfortunately this is complete rubbish and little more than a coincidental homophone. A nice one, I’ll admit that, but . . . 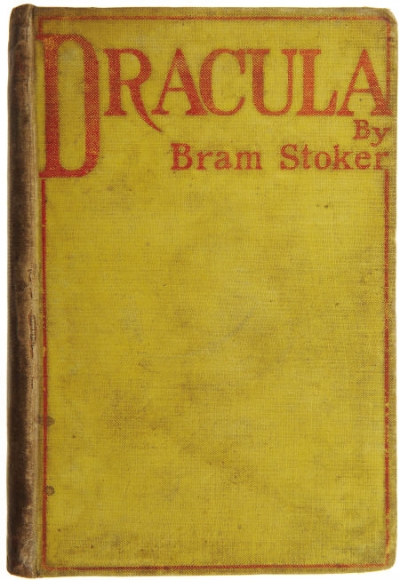 I usually hear the false “droch fhola” claim repeated in locally-produced documentaries or in pamphlets focused on labouring the well-established biographical fact of Stoker’s Irish origin. I’m guessing this is probably a vain attempt to hitch (and therefore legitimise?) Stoker’s best-known novel to the national identity—as if Stoker simply being a Dubliner isn’t enough, he needs to have written a thoroughly Irish novel, apparently. (By the way, if you’re looking for an Irish novel by Stoker, check out his first book The Snake’s Pass published in 1890. It’s a cracking read!)

As a rule of thumb, however, beware anyone who tells you they know what Dracula is really about. That it is, for example, a veiled commentary on the nineteenth-century Irish absentee landlord system. It’s a fair reading of the novel, sure, but that’s different from declaring such an interpretation as Stoker’s own clever and intentional encoding.

I’d also discard immediately any genealogist who makes the claim that Dracula was inspired by Stoker’s distant relative, the sixteenth-century Irish lord Manus “the Magnificent” O’Donnell. While I won’t dispute that Stoker and O’Donnell share DNA—many of us on the island probably do anyway, not to mention said genealogist also certified Barack Obama as Irish—but I do have a problem with someone making the further claim that this, of course, must then be the true inspiration for Dracula. Notice a trend here? (Cue Carly Simon: ” . . . you probably think this song is about you.”) 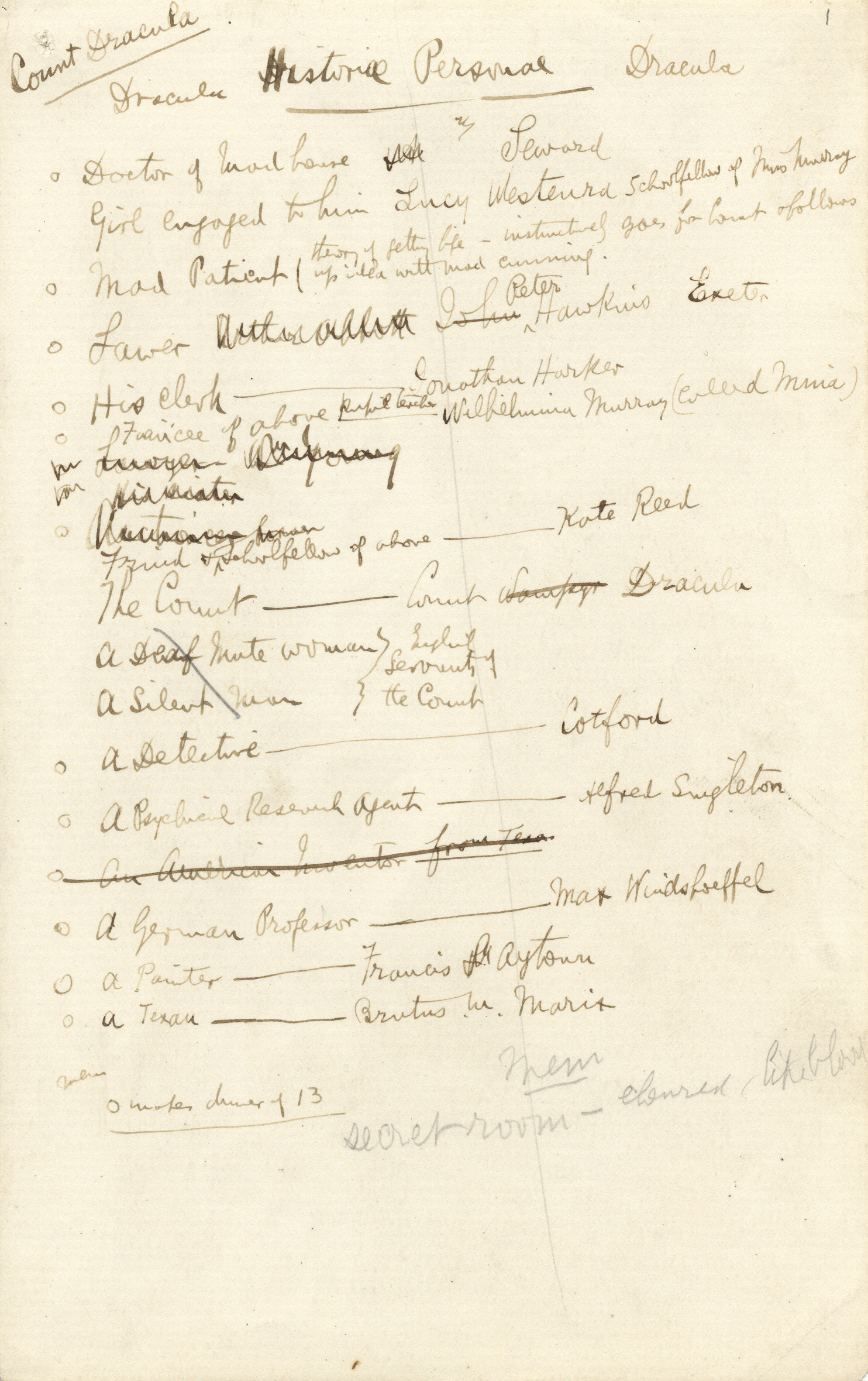 For all of the confusion and misinformation that obscures Stoker’s novel like a thick Victorian fog, there is one primary resource we do have that’s really quite amazing: Bram Stoker’s own working notes for Dracula. The notes were published in a beautiful facsimile edition with transcriptions and annotations by Robert Eighteen-Bisang and Elizabeth Miller. Dr. Miller, by the way, also wrote a book called Dracula: Sense & Nonsense. She wrote it to dispel the enormous mountains of bullshit and fabricated mythologies that have accumulated over the decades and now obstruct the popular perception of the original novel. Crab-induced nightmares, anyone?

But let’s get back to this “droch fhola” bullshit and Stoker’s working notes for Dracula. It’s a fascinating collection of documents and if you’re at all interested in Stoker you might want to have a look at it. Among the extensive notes, Stoker tells us exactly where he got the name “Dracula”. And it’s got nothing to do with Ireland at all. Sorry, lads! Here, have a look for yourself: 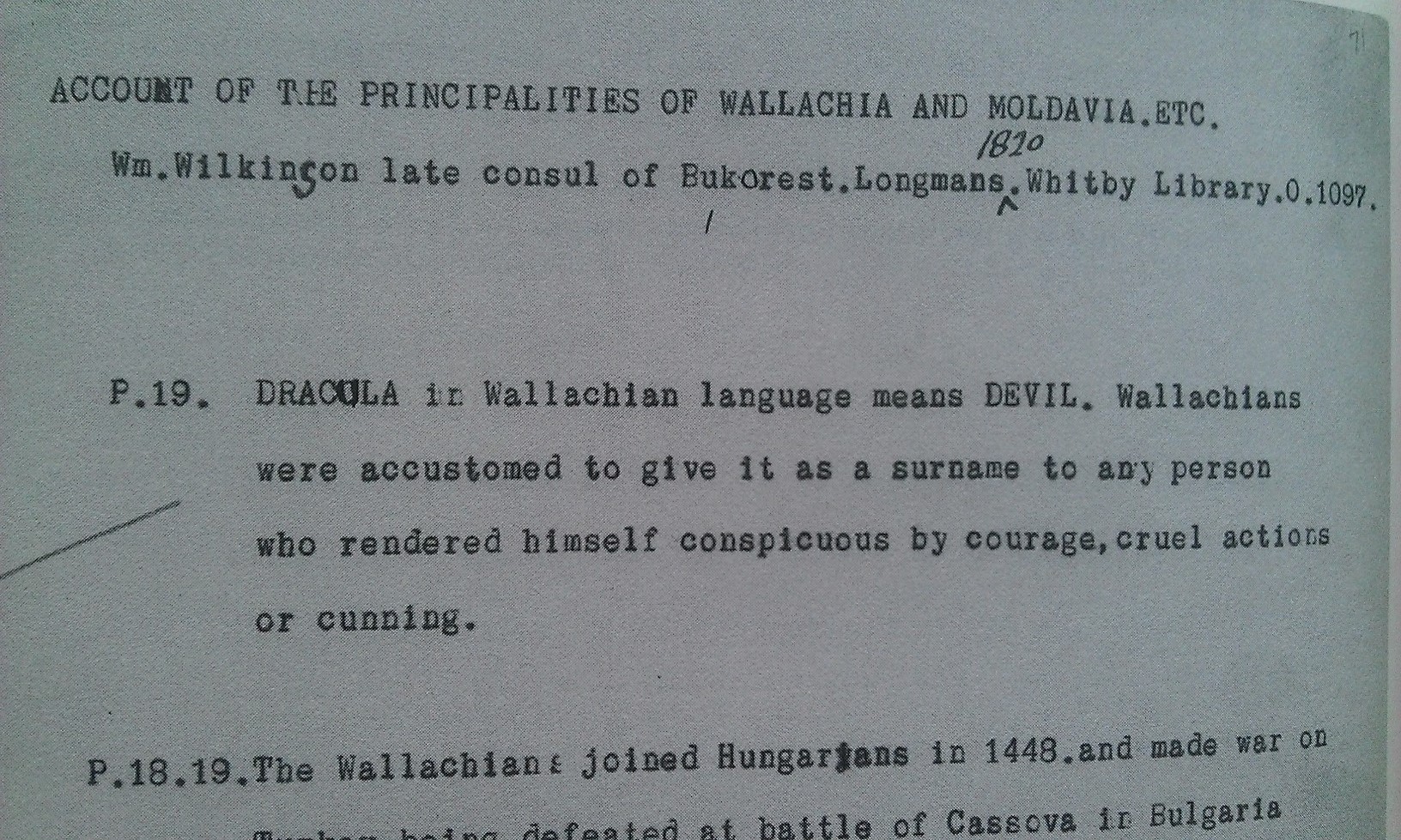 I’d say Stoker’s own notes are a lot more convincing than all that wishful speculation and naval-gazing, don’t you? And just for good measure, here’s the page from Wilkinson’s Principalities of Wallachia and Moldovia (courtesy of the John Moore Collection) that Stoker is referring to in the above note. It’s even the very same edition he would have looked at in the Whitby Library in August 1890 : 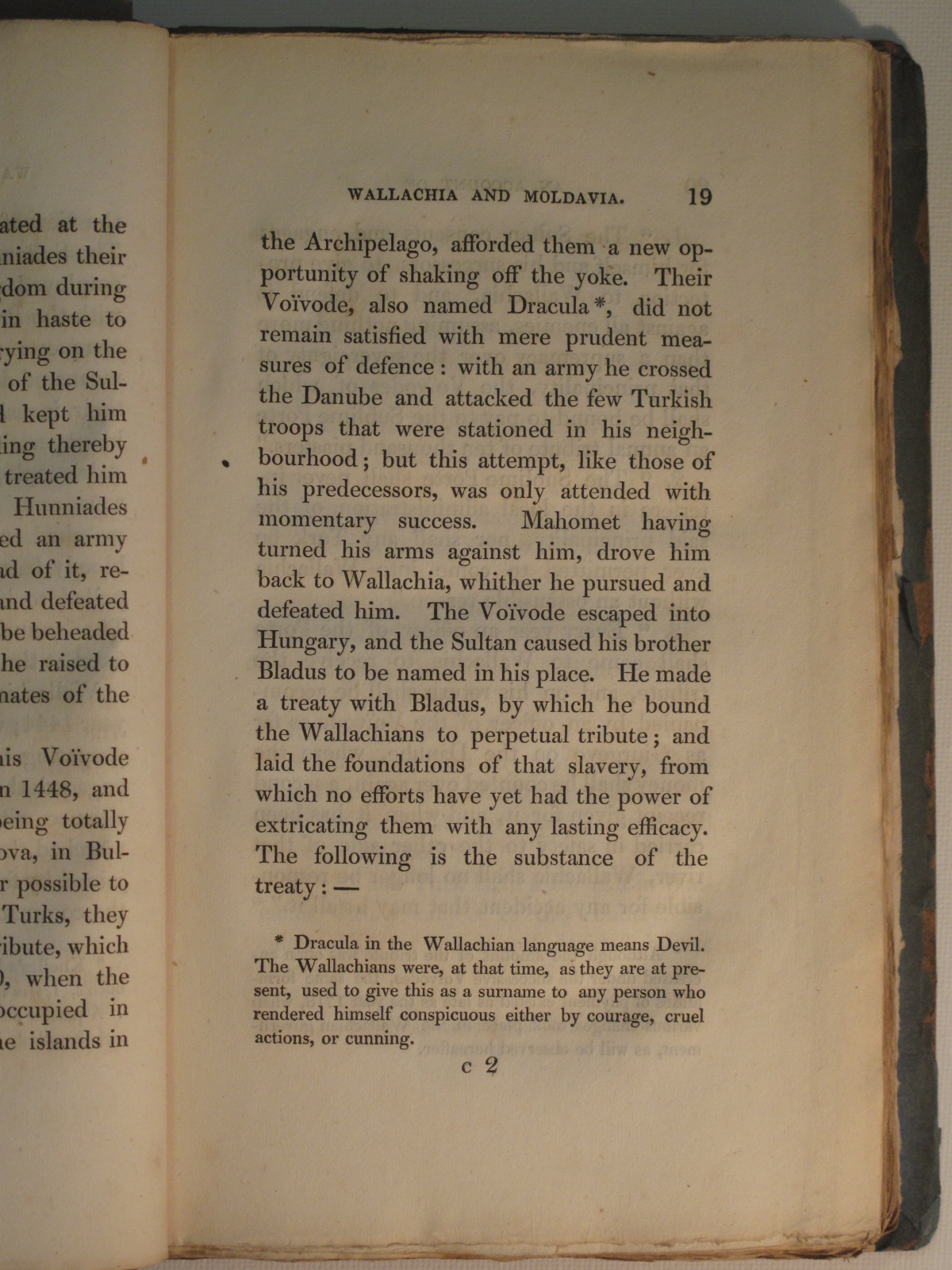 If you’re really interested in Stoker and Dracula, here’s a core list of books I’d suggest you read. The first one might seem a little obvious to state, but when I first read Dr. Miller’s Sense & Nonsense, I noted how many times she upended a spurious assertion simply by quoting directly from the novel. So, first up:

Next we have some immediate works about Dracula. Anyone serious about investigating the novel needs to borrow these from the library:

These next two are vitally important because they’re the main documents where Stoker gives us any real personal insight, and even then there’s not much:

And see, that’s the main problem. Stoker never really wrote that much about himself. Most of what we know about Stoker is inferred from other sources. That’s why making claims about Stoker’s “true” intentions is problematic. As for biographies, until David J. Skal’s Something in the Blood: The Untold Story of Bram Stoker comes out later next year, I will refer you to:

On the other hand, if you’ve got access to some primary source of information that indicates Stoker was familiar with the phrase “droch fhola“, or even that he knew some Irish, you really ought to share it with the rest of us—because it would be a major literary discovery.

Next week, we’ll be discussing whether or not the mummies of St. Michan’s church were the inspiration for Dracula—and the further assertion that the young Stoker used to play amongst the tombstones there as a child. How a child who was an invalid until the age of seven could play in a churchyard is beyond me—and why his mother allowed the fragile boy to travel to the other side of Dublin, when there were perfectly good churchyards much closer to the house, is probably a matter for the Department of Child Welfare and Protection. One might as well head to Transylvania on an expedition for the “real” Castle Dracula. (Hint: try the first four chapters instead.)

Until then, class dismissed!

For those with a further interest in Bram Stoker, Swan River Press has recently published a hitherto unknown ghost story by Stoker. It appears in print for the first time since its original publication in 1873 in issue six of our flagship journal The Green Book. You can order a copy here. 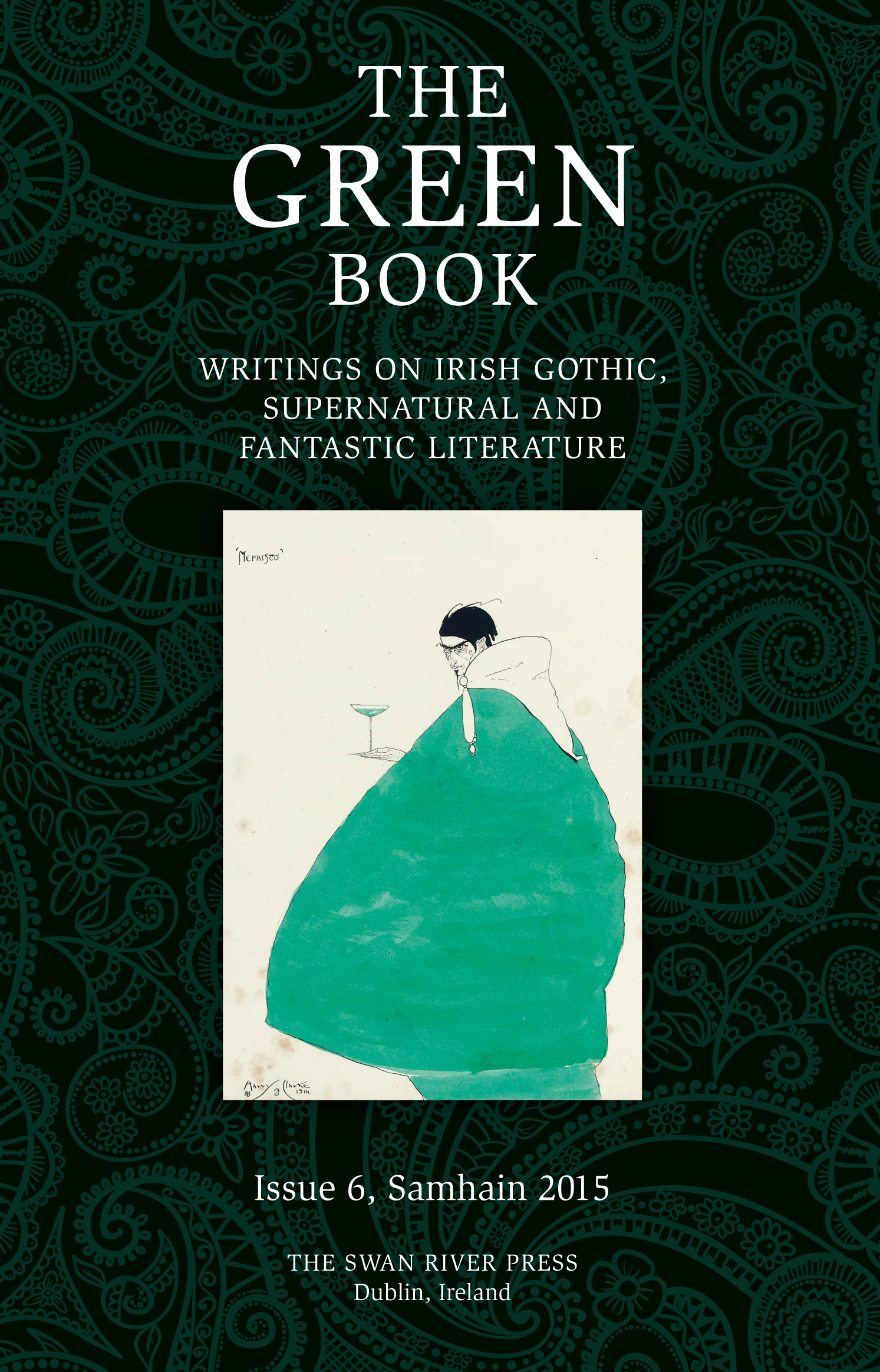