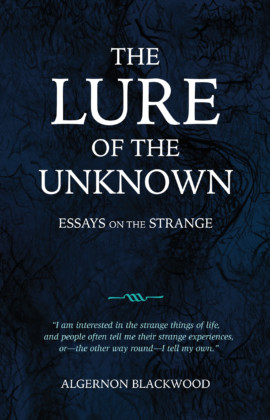 The Lure of the Unknown

Essays on the Strange

“Every thing possible to be believ’d is an image of truth.” – William Blake

The Lure of the Unknown is a collection of Algernon Blackwood’s essays, talks, reviews and anecdotes exploring encounters with the strange and unusual or, in Blackwood’s preferred word, the “odd”. They include his first attempts to investigate alleged haunted houses, his association with such luminaries as W. B. Yeats, “A.E.”, and Gurdjieff; his thoughts on telepathy, reincarnation, elemental spirits, other dimensions, and his beliefs in what lies beyond our normal perceptions. These writings reveal not only Blackwood’s diverse experiences, but his depth of reading and analysis of the unexplained. Few of these essays have been reprinted beyond their first publication or their broadcast on radio and television. They provide another dimension to an understanding of one of the great writers of the supernatural.

“Hidden Thoughts” – Mike Ashley
“Looking Back at Christmas”
“I Speak for Myself”
“How I Became Interested in Ghosts”
“The Midnight Hour”
“Minor Memories”
“My Strangest Christmas”
“The Little People & Co.”
“The Birth of an Idea”
“Our Former Lives”
“The Fire Bodies”
“Passport to the Next Dimension”
“Adventures in Thought-Transference”
“Oddities”
“Gooseflesh”
“Along Came a Spider”
“The Fear of Heights”
“Superstition and the Magic ‘Curse'”
“The Psychology of Places”
“Dreams and Fairies”
“Explorers’ Ghost Stories”
“The Lure of the Unknown”
“Queer Stories”
“Sources” 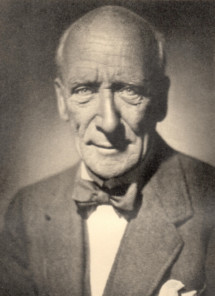 Algernon Blackwood (1869-1951)—journalist, novelist, broadcaster—is best remembered for his occult detective John Silence and, in particular, two terrifying tales of otherworldly encounters: “The Willows” and “The Wendigo”. The intensity of Blackwood’s stories often arose from personal experiences: his days struggling to survive in the hell of 1890s New York, his travels down the Danube, across the Caucasus, into the depths of Egypt, or the remote mountain passes in Switzerland—all fed his fascination with Nature.

“This is an essential book for any Blackwood fan.” – Michael Dirda, Washington Post 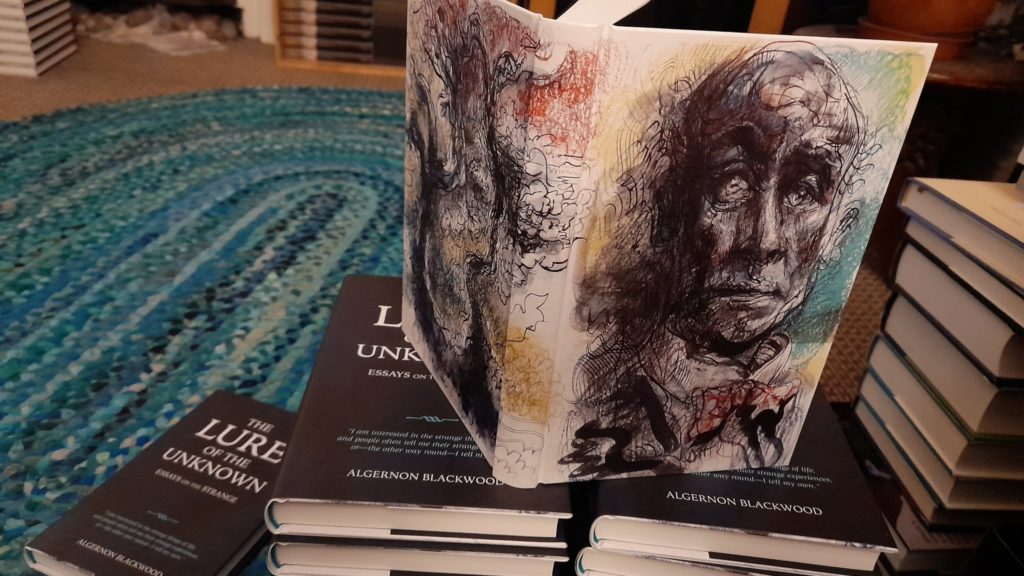 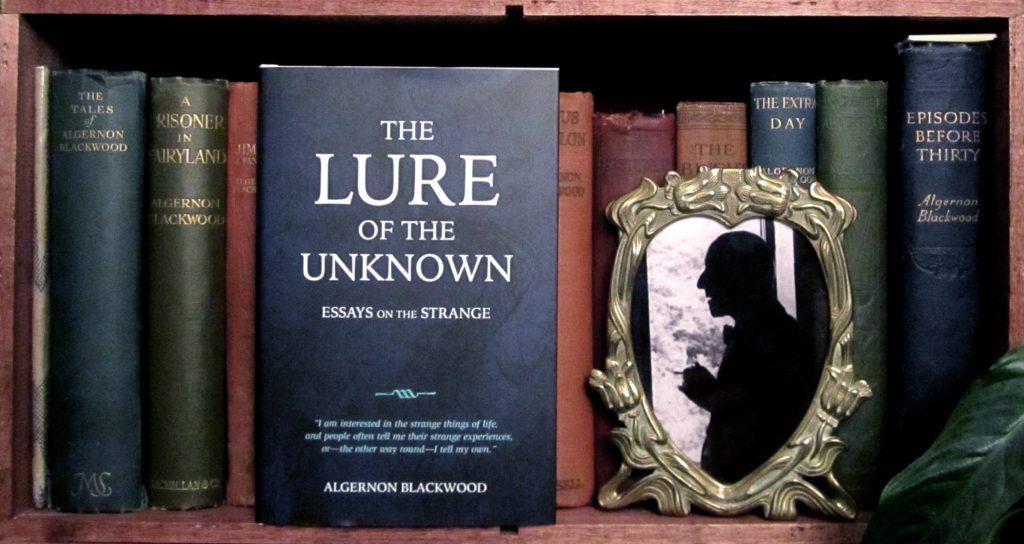 First broadcast in the series “Books and Authors” on BBC Light Programme on 31 January 1948.

BBC: When writing one of your really creepy stories do you, yourself, get a feeling of this so-called “gooseflesh”, or a chill down the spine?

AB: If I didn’t feel it myself, it doesn’t get across. Actually, in fact, it’s feeling the creeps or gooseflesh that starts the story. No creepy story starts without that first shock of the uncanny. Once felt, your instinct—if you’re a writer—is obviously to give expression to your emotion in a story. Oddly enough, an emotion tries to express itself—to dramatise itself—hence the story. Without that first stimulating thrill, any story remains still-born. No story results. But—and this is a big but—I must obviously be thrilled myself—feel that chill down the spine—before I can hope to “get it across”, in story form. Interesting, perhaps, to remember the primitive origin of this gooseflesh. An animal, when frightened, wants to make itself as big and fierce-looking as it can. Up goes its fur, its hackles. Well, our hair or fur has gone, but the action of the pores or hair roots remains.

BBC: I’d never heard that before. But tell me, where do you get it from, this shock of something unusual, uncanny, other-worldly, call it what you will. What is its origin? What causes it in your own case, for instance?

AB: Your question is good and penetrating. I’d love to answer it. You want to know in terms of the man in the street, let us say, what starts this shock of the queer, the uncanny, the so-called supernatural sensation. Where, for instance, do I myself get it from? In a few words, it’s hard to summarise, but it comes, I think, from the usual appearing suddenly unusual. A normal incident in normal life—catching a bus, meeting a friend, anything—suddenly and, above all, inexplicably, takes on another guise. You are puzzled, worried, even scared a bit. The incident is over. What’s the explanation? You don’t know. “That’s odd,” you say to yourself, and you feel an unpleasant thrill down the spine—gooseflesh.

BBC: That may be, but, after all, it doesn’t get much further.

AB: Agreed. One further answer, I think, is that anything “out of the ordinary” alarms us. Most of us are mere mechanical automata. The machine then plays tricks—and we are suddenly scared to death.

BBC: But what gives you, personally, gooseflesh?

AB: Well, I think my best answer is that it’s something, some incident, some combination of atmosphere and accidental surroundings at a given moment—anywhere—at home, in a forest, on a lonely mountain, out in the desert, on the tube—suddenly seems unnatural, and therefore inexplicable. And it frightens.

BBC: But why? Why the chill down the spine?

AB: Because, firstly, it’s unusual. Secondly, and I believe this is vital, because it stirs to life in me a touch of those old primitive instincts of long ago. The fear of the dark, the dread of the external animistic universe, when a clap of thunder was a god roaring. This underbed of superstitious terror lies in every one of us. It is still easily evoked. The unusual, the inexplicable, awakens it. This deep thrill of superstition in us—above all in our so-called intellectuals, who are both ashamed to admit it and puzzled to explain it—is still active subconsciously. Humanity still lies rather terrifyingly close to the primitive caveman, with his fear of the dark.

BBC: You mention superstition—do you mean in a derogatory sense?

AB: On the contrary. Superstition lies more or less hidden in all of us and is too easily tapped in daily life. We all recognise that. The so-called supernatural is a different question. It’s a silly, meaningless phrase. Everything is natural and under natural laws. Only there are other laws of which we are so far ignorant.

AB: An aboriginal, hearing my voice suddenly out of a box is pure magic, because he is ignorant of the natural laws producing it.

AB: Quite so—and why it’s been the theme of so many of my stories, John Silence among them. Well, I imagine the vein of primitive superstition lives on in me. I love a ghost story. As a boy, my father told me lovely ones, though he, being evangelical, attributed them mostly to a personal devil. Then I went searching for myself and found others. Few had the authentic touch, I’m afraid. Few gave me the real genuine gooseflesh we’re talking about. The clever ones were invented by the brain, the mind, admirable in their construction and literary craft, but—and it’s a big “but”—the writers hadn’t felt in themselves that awful otherworldly thrill of personal experience. I find it rarely, this awful personal thrill. How well I remember, be the result good or bad, feeling so frightened while writing that I had to sit with my chair against the wall—with the horrible feeling that something might get at me from behind while I was writing, in an Alpine hut . . .

BBC: What story was that?

AB: “The Wendigo” . . . it scared me stiff. I well remember being afraid to go to sleep without the light on.

BBC: And other writers?

AB: I devour everything in the field, but the authentic touch is rare. The brain doesn’t write “gooseflesh” tales. The frightened heart does.

Though he worked in local government until 1998, Mike Ashley has still managed to spend over fifty-five years collecting, reading and researching popular fiction, especially fantasy, supernatural, crime and science fiction. He has compiled or edited over 100 books including reference works for children, a biography of Algernon Blackwood and a five-volume series on the history of the science-fiction magazines, though he is probably best known for the many Mammoth Book anthologies he has compiled. His Age of the Storytellers explores the British popular-fiction magazines from the 1880s to 1940s. He received the Pilgrim Award for Lifetime Achievement in science-fiction scholarship in 2002 and the Edgar Award for The Mammoth Encyclopedia of Modern Crime Fiction in 2003.