“I was probably about thirteen years old when I read Dracula for the first time. I have no idea why. I ordered it from one of those little book catalogues you used to get in school. I shudder to think what would have happened if, instead, I’d tried to read Frankenstein at that age. It surely must have been in the same catalogue. Maybe I’d be an accountant now. Nothing against Frankenstein, but I know me, and I know it would not have hooked me through the eyeball (and brain) the way Dracula did. I distinctly remember finishing the book and thinking, ‘Well, this is it. I have found my thing.’ It’s like finding that city or, if you’re very lucky, that house where you know you want to spend the rest of your life. And that’s pretty much what I’ve done.”

Just in time for Christmas comes the definitive edition of Stoker’s famous haunted house story, “The Judge’s House”. This facsimile edition, celebrating the 120th anniversary of the tale’s first appearance, reproduces the text from Dracula’s Guest and Other Weird Stories (1914). And especially for the occasion, Mike Mignola, the esteemed creator of Hellboy, has provided an original frontispiece—a portrait of Stoker’s baleful and vindictive Judge—and an introduction entitled “Bram Stoker and I”. Also included is a reproduction (in miniature) of the story’s 1891 appearance in the Illustrated Sporting and Dramatic News‘s Christmas annual, Holly Leaves. Rounding out the booklet are endnotes and an afterword by Gothic scholar Jack G. Voller. And remember, “Rats is bogies, I tell you, and bogies is rats!” 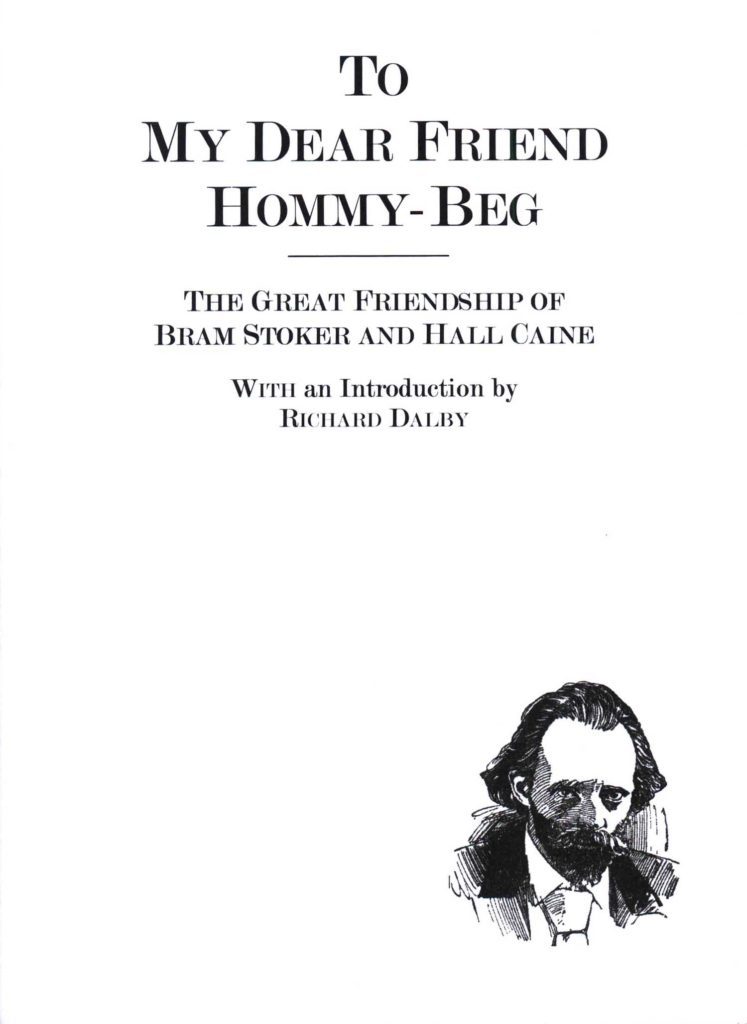 “Hall Caine was an incredible literary phenomenon, becoming the richest and most popular novelist of the late Victorian and Edwardian era, greatly outselling all of his rivals from Henry James to Joseph Conrad. By the end of the twentieth century all of his novels were out-of-print, and ironically his major claim to fame now comes from being the dedicatee of Dracula, albeit under the disguised family nickname of “Hommy-Beg”. It is a bizarre twist of fate that Bram Stoker is now so much more famous worldwide than Hall Caine—an unbelievable reversal of their roles one hundred years ago.”

This booklet explores the intimate, lifelong friendship between Stoker and Caine in their own words. Accompanying an introduction by Stoker scholar Richard Dalby are rare and un-reprinted pieces including letters, extracts from Caine’s autobiographical My Story (1908) and Stoker’s Personal Reminiscences of Henry Irving (1906), Stoker’s introductions to The Works of Hall Caine (1905) and hitherto unknown essay “The Ethics of Hall Caine” (1909), Caine’s touching obituary to Stoker (1912), and a reproduction of Stoker’s inscription to Caine in the latter’s copy of Dracula—printed here for the first time. 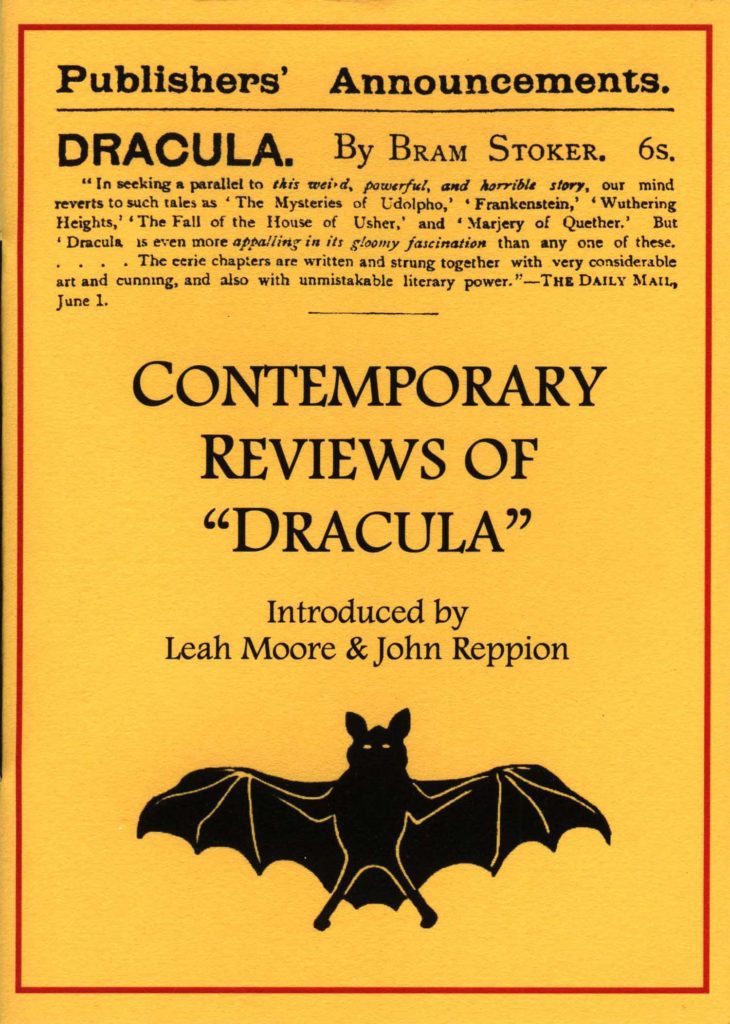 “Over the decades, as with so many other iconic stories, Dracula has fallen prey to numerous popularly held misconceptions. Until recently we had ourselves laboured under one such misconception: that Dracula was not well received by the reading public when it was first published. We believed it to have been something of a disappointment where sales where concerned; an overlooked treasure, ahead of its time, destined to be rediscovered at a later date… we also assumed that some of the subtler aspects of the novel, which give the post-modern reader satisfaction, might have gone over the heads of the nineteenth century audience. How could a stuffy Victorian possibly get pleasure from this book in the same way a twenty-first century reader might? Needless to say—as this volume of reviews demonstrates—we grossly underestimated not only the horror reader of 1897, but also, to some degree, Mr. Stoker himself.”

Contemporary Reviews of “Dracula” collects together a selection of reviews of Stoker’s seminal work shortly after it was published in England in 1897 and in America in 1899. These reviews—both complimentary and critical — give insight into Dracula‘s initial public reception, unmarred by decades of misconceptions, academic scrutiny and literary legendry. Assembled from the list provided by Richard Dalby and William Hughes in their Bram Stoker: A Bibliography, these reviews appeared in many of the leading publications of their day, including The Spectator, Punch, Vanity Fair, and The Athenaeum. The booklet includes an insightful introduction by Leah Moore and John Reppion, who faithfully adapted Dracula as a graphic novel; and also reproduces first edition US and UK covers, as well as two short reviews of Dracula’s Guest and Other Weird Stories (1914). 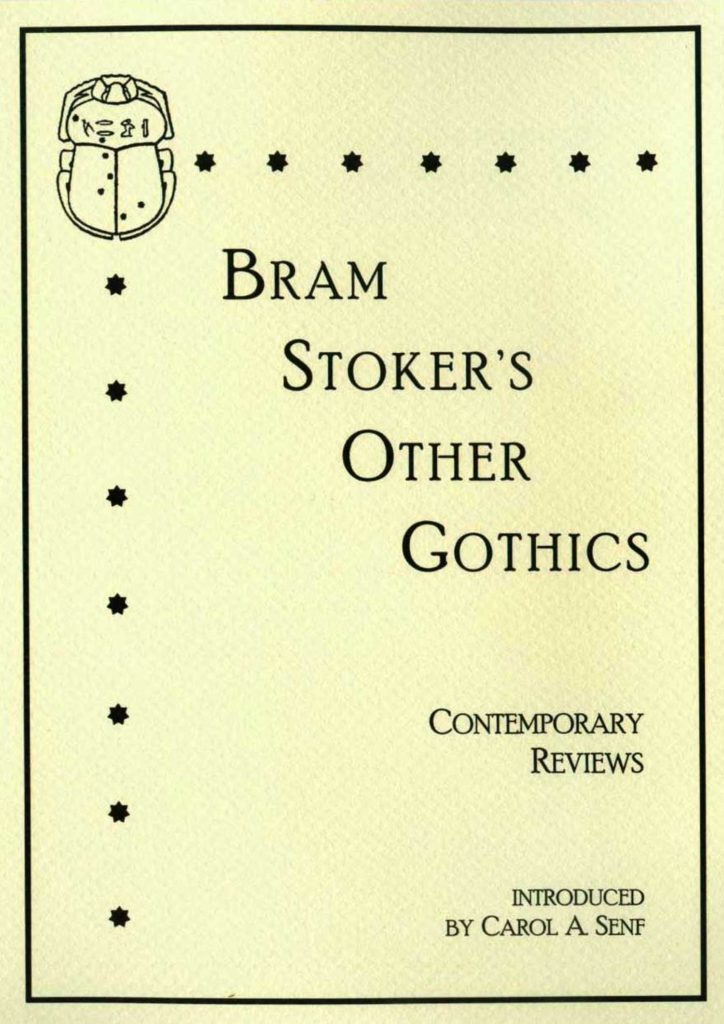 “Just as I would recommend any of Stoker’s works, these reviews serve as a reminder that Stoker’s literary legacy is substantially more than just Dracula, still his best-known work. These reviews, most of them now in print for the first time in over a century, provide fresh insights into Bram Stoker as an author who dabbled in the popular genres available to writers at the turn of the twentieth century, and who made the Gothic genre his own, not only in Dracula, but in other works that today are not as well known as they deserve to be.”

Collected here are a selection of reviews of Stoker’s works that are generally classified under the broad heading of Gothic: Under the Sunset (1882), The Snake’s Pass (1890), The Mystery of the Sea (1902), The Jewel of Seven Stars (1903), The Lady of the Shroud (1909), and The Lair of the White Worm (1911). Assembled from the list provided by Richard Dalby and William Hughes in their Bram Stoker: A Bibliography (Essex: Desert Island Books, 2004), these reviews appeared in many of the leading publications of their day, including The Spectator, Punch, The Academy, and The Athenaeum as well as in more specialised journals such as The Dial, The Bookman, The Reader Magazine. 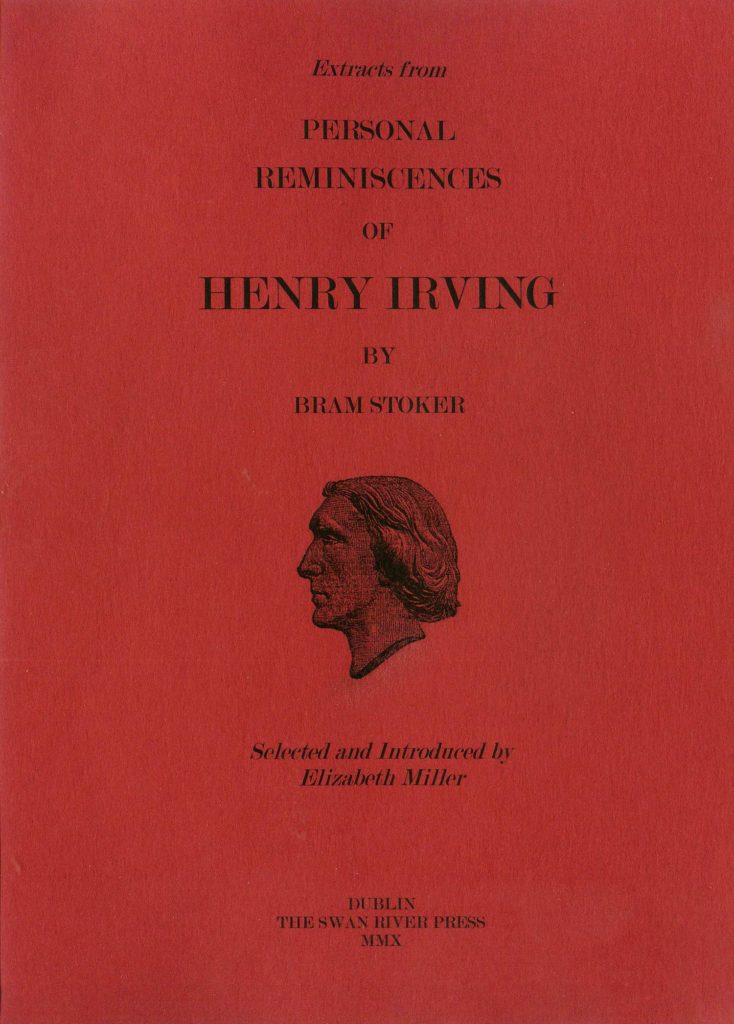 “Henry Irving had died in 1905. Born John Brodribb in a Somerset village in 1838, he was the son of a travelling salesman. He would become one of the best known figures in London, and the first actor be be honoured with a knighthood. He acquired the Lyceum Theatre in 1878 and quickly hired Bram Stoker (then living in his native Dublin) to join him as Acting Manager. Stoker was immediately swept into a whirlwind of activity on which he thrived: seasons in London, provincial tours, and eight North American tours. Biographers concur that Henry Irving was the single greatest influence on Stoker’s life.”

Bram Stoker’s tribute to his late, former employer in Personal Reminiscences of Henry Irving (1906) proved to be one of his most successful books during Stoker’s lifetime. While Dracula has since surpassed Personal Reminiscences in popularity, the latter title contains many fascinating accounts central to the author’s life. Selected and introduced by Elizabeth Miller, this booklet features the most interesting portions of Stoker’s semi-autobiographical account. Extracts focus on Stoker’s early meetings with Irving, anecdotes from his years managing the Lyceum Theatre in London, and his association with many of the famous people of his day including Whitman, Gladstone, Tennyson, Browning, Vambéry and Liszt. The volume also includes excerpts from five contemporary reviews. 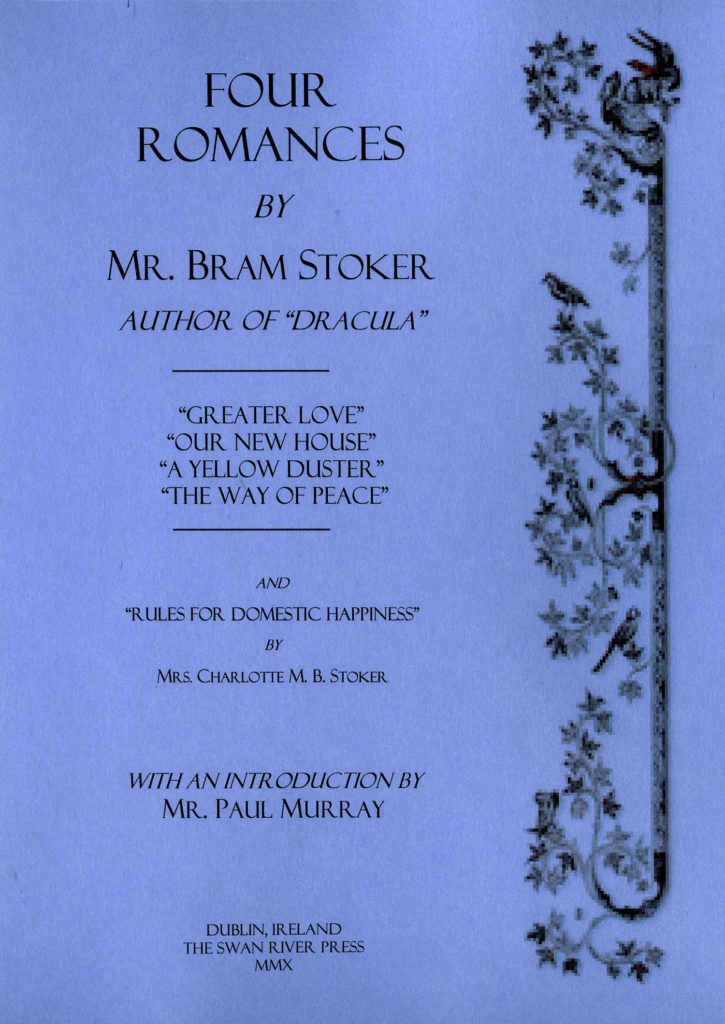 “While the stories that make up this collection are not among Stoker’s best, they do cast an interesting light on the psyche of their creator. His lifelong concerns, anxieties, obsessions and ambiguities would cohere into the masterpiece that is Dracula in the 1890s but his other work, including these stories, shine a revealing light into the mind of its creator, a mind more profound, if also more troubled, than has generally been realised.”

Here collected for the first time since their original publication in periodicals, these four romances display a side of Bram Stoker’s writing somewhat less familiar to modern readers. Even so, these tales are not quite devoid of the elements we have come to expect from the master of horror, mystery, cruelty and black humour. Spanning Stoker’s literary career, this volume reprints “Greater Love” (1914), “Our New House” (1886), “A Yellow Duster” (1899) and “The Way of Peace” (1909). Rounding out the collection is an introduction by Stoker biographer Paul Murray and a never before printed essay, “Rules for Domestic Happiness”, by Charlotte M. B. Stoker—Bram’s mother, who is often credited with instilling in the young author an early sense of fatalism and the macabre.

“It was on a raw January evening in 1980, at a public meeting held in the darkling pile of Trinity College Dublin’s graduates memorial building, with its ample expanse of grey frontage, high windows and maw-like entrance led up to by a flight of stone steps, that the sturdy first steps to set up the Bram Stoker Society were taken. The date was January 10th and the event had been organised by the college Philosophical Society, of which Bram Stoker had been President in 1869-1870.”

Albert Power was present at the January 1980 inaugural meeting of the Bram Stoker Society in Trinity College as a rapt undergraduate. Now, at the dawn of an exciting new chapter in the society’s history, he paints a personal picture of its uneven, sometimes unsettled growth—from the heady days of the early 1980s when a plaque was installed on premises lived in by Bram Stoker on Dublin’s Kildare Street; through the short fraught association with Trinity College’s Philosophical Society; the thirteen years of the journal; the Bram Stoker Club; fraternal links with the Clontarf-centred annual Bram Stoker Summer School; to the death of the society’s founder and chairman, Leslie Shepard, in August 2004. The narrative concludes with a putative pencil sketch for the future.