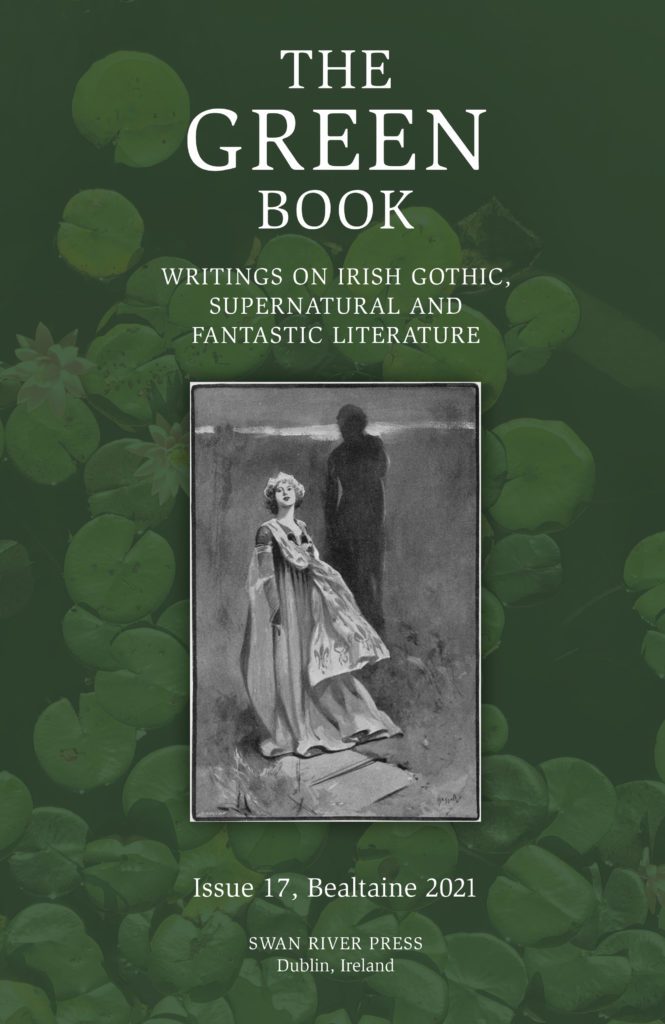 As it turned out, Issue 15, which was comprised entirely of fiction, proved to be quite popular. So I had a look in my files to see if I could put together another such issue of refugee writings that did not fit elsewhere in our publishing schedule.

Let the curtains rise on Oscar Wilde’s “The Harlot’s House”, first published in The Dramatic Review (11 April 1885), which publisher Leonard Smither’s notes is “not included in the edition of his collected Poems”—I assume a reference to the volume issued by Elkin Mathews and John Lane in 1892. While “The Harlot’s House” has since become available, we would like to present it here as Leonard Smithers had in a portfolio edition in 1904: with five “weirdly powerful and beautiful” drawings by Althea Gyles, known for her lavish cover designs for Yeats’s poetry collections, including The Secret Rose (1897), two covers for The Wind Among the Reeds (1899/1990), and Poems (1900). We will explore more fully this remarkable artist in a future issue of The Green Book.

H. de Vere Stacpoole’s “The Mask”, a deft little shocker set in the Carpathian Mountains, had previously a couple of outings in 1930s anthologies, including My Grimmest Nightmare (1935) and Not Long for This World (1936). While de Vere Stacpoole is best known for his popular novel The Blue Lagoon (1908), his career is sprinkled with tales of the macabre. A profile of his life and writings can be found in Issue 12.

Next is Herbert Moore Pim’s “The Ravished Bride”, a gothic narrative in verse set in the north of Ireland, and quite unlike the stories found in his oddball collection Unknown Immortals of the Northern City of Success (1917). You’ll find his story, “The Madman” in Issue 15, while a full profile of this quixotic author is in Issue 12.

After this we have two stories by Katharine Tynan, neither of which have been reprinted before. We considered both when compiling The Death Spancel and Others, which Swan River published in late 2020, but ultimately decided they wouldn’t strengthen that volume. We rejected “The Heart of the Maze” because it is simply not a supernatural tale; however, it does possess dream-like and faerie tale-type qualities not atypical of Tynan’s work. The second story, “The House of a Dream”, while it does contain psychical elements, we deemed far too similar in plot to “The Dream House”, the latter of which we did include in The Death Spancel. As a commercial writer, Tynan reused plots and themes to keep up with the demands of the fiction markets. Despite this pace, her writing remained of the highest quality: elegant, descriptive, and a pleasure to read.

Following the two stories by Tynan you’ll find three poems by Dora Sigerson Shorter, all of which were selected by Margaret Widdemar for her anthology The Haunted Hour (1920), a volume that also included contributions from Yeats, Tynan, and Walter de la Mare. Widdemar takes for her strict definition of a “ghost-poem” as “poems which relate to the return of spirits to earth”. Sigerson Shorter’s poems deftly evoke a night-time Ireland populated by revenants and other wandering ill-omens, such as the fetch and the banshee. If you want to learn more about Sigerson Shorter’s life and work you can read about her in Issue 13; her remarkable story “Transmigration” can be found in Swan River’s Bending to Earth: Strange Stories by Irish Women (2019).

Finally we have “To Prove an Alibi” by L. T. Meade and Robert Eustace, a tale of mystery and terror reminiscent of Wilkie Collins’s “A Terribly Strange Bed” (1852). This story is one in a series to feature John Bell, later collected as A Master of Mysteries (1898). Bell is a “professional exposer of ghosts” whose business is to “clear away the mysteries of most haunted houses” and to “explain by the application of science, phenomena attributed to spiritual  agencies”. More on Meade can be found in The Green Book 16; we will be seeing more from her soon.

And there you have it, ladies and gentlemen, another issue of weird, gothic, and macabre poems and stories from Irish writers. I write this on Saint Patrick’s Day, under a clear blue sky in Dublin; and I hope some of the convivial cheer and goodwill of the day reaches you as you read this issue.

Want to catch up on back issues? We have a special offer.

“The Heart of the Maze”
Katharine Tynan

“The House of a Dream”
Katharine Tynan

“To Prove an Alibi”
L. T. Meade and Robert Eustace