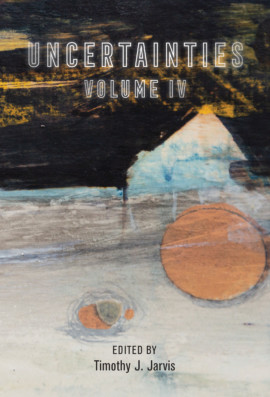 The Gothic tale, disreputable as it is, can, more readily than the realist short story, provoke unease and jolt us from complacency.

Uncertainties is an anthology series—featuring authors from Britain, America, Canada, Australia, and the Philippines—each exploring the concept of increasingly fragmented senses of reality. These types of short stories were termed “strange tales” by Robert Aickman, called “tales of the unexpected” by Roald Dahl, and known to Shakespeare’s ill-fated Prince Mamillius as “winter’s tales”. But these are no mere ghost stories. These tales of the uncanny grapple with existential epiphanies of the modern day, when otherwise familiar landscapes become sinister and something decidedly less than certain . . .

Cover art by B. Catling
Selected and introduced by Timothy J. Jarvis

“I Seen Her” – Rebecca Lloyd

“We Pass Under” – Gary Budden

“At the Museum” – Marian Womack

Timothy J. Jarvis is a writer and scholar with an interest in the antic, the weird, the strange. His first novel, The Wanderer, was published by Perfect Edge Books in 2014. His short fiction has appeared in The Flower Book, The Shadow Booth Volume 1, The Scarlet Soul, Murder Ballads, and Uncertainties I, among other places. He also writes criticism and reviews, and is co-editor of Faunus, the journal of the Friends of Arthur Machen.

“A collection, as a whole, that certainly stirred my imagination; in fact the book started to own my imagination, and I was relieved to be given an excuse to try rebelling against it towards the end!” – Real-Time Reviews

“The quality of the included tales remains consistently high, in keeping with the previous three books . . . highly recommended to any fiction lover.” – Hellnotes

“[Uncertainties 4] has, for me, illustrated yet again the broad range of Gothic fiction, and more than hints at a genre revival in this century far more impressive than anything in the last. Perhaps this is because, like the Victorian era, ours is one of uncertain peace, irrational fads, scientific progress, and deeply unstable societies that are mirrored in confused personal identities and relationships. And people still like spooky stuff a lot. “ – Supernatural Tales

“The authors in this volume leave their readers with powerful messages, beautiful yet disturbing landscapes, and, as the title proudly suggests, a state of Gothic uncertainty.” – Write or Die Tribe 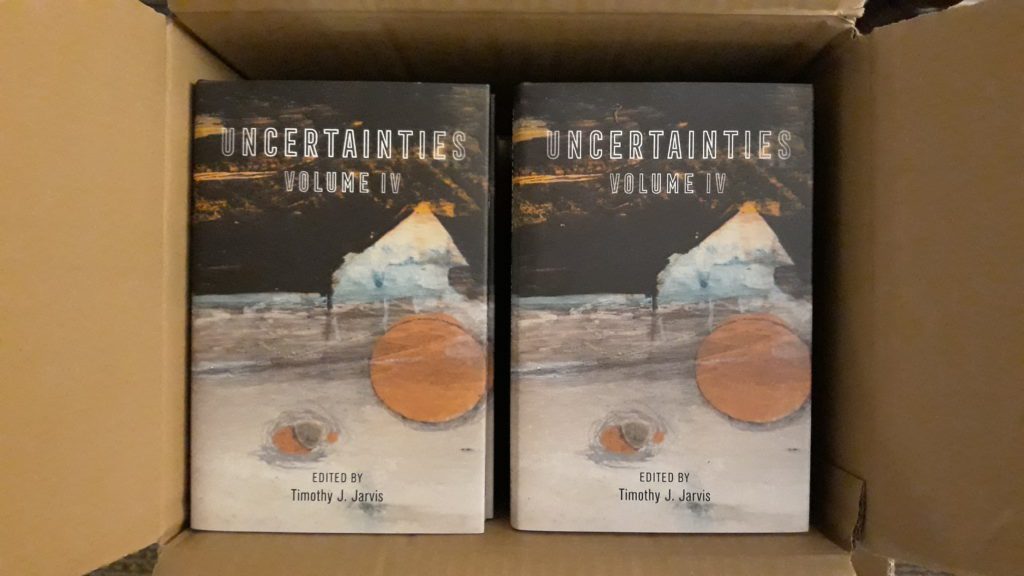 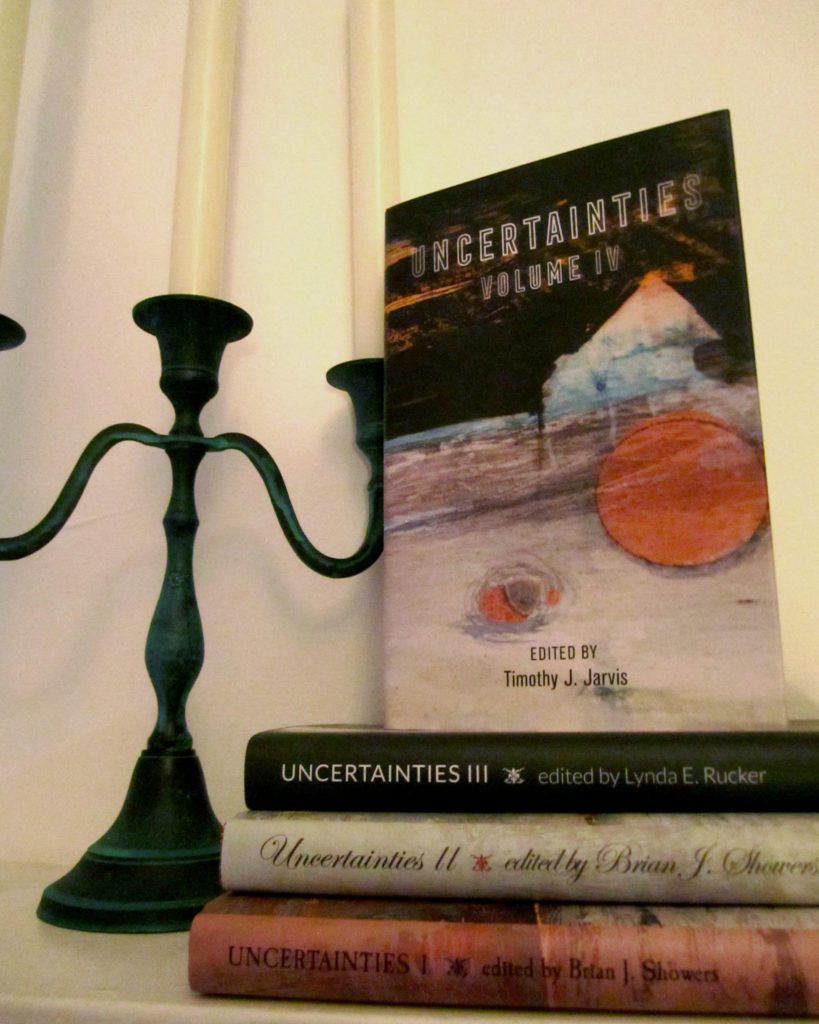 Over the last year or so, I’ve been working on putting together the fourth in Swan River Press’s series of contemporary supernatural and strange tale anthologies, Uncertainties. It’s the first time I’ve edited a fiction anthology and it’s been one of the most rewarding things I’ve done in writing. It’s been great seeing the thing take shape—as it started to come together, it began to take on a life of its own. Brian J. Showers at Swan River was incredibly helpful throughout the process, sharing his wealth of experience. He pretty much gave me free rein, his only brief being that I bring in some writers who hadn’t featured in the series before, and who might be new to the press. It has long been my feeling that innovative writing can enhance the uncanniness of a supernatural tale, so I solicited contributions from writers who I thought would be playful and experimental with their tales. And as cohesion was really important to me from the outset, I also asked writers whose work I thought would share points of similarity. As the pieces came in, I saw this had worked better than I’d dared hope and that there were lots of potent synchronicities between the stories. But there was also a lot of variety, so I starting thinking about how certain juxtapositions might work and also how to ensure an overall flow. The tales are all experimental in some way, but run the gamut from melancholia, to outright horror, to comedy. I wanted to balance and shift between tones in a hopefully satisfying way. It took me back to the days of making mixtapes for friends, and thinking about flow, moving between moods, and setting up a kind of loose overall narrative from disparate parts.

This was an incredibly satisfying process. It was also really satisfying to work with the talented Swan River team of Meggan Kehrli, Ken Mackenzie, and Jim Rockhill, whose design and editing skills ensured the finished article looks superb. And it was a real privilege to have for the cover a powerful piece of art by modern surrealist, Brian Catling, from a series of paintings inspired by the writing of M.R. James—it mingles the ghostly and the bizarre in much the same way as the tales within.

The section below is taken from my introduction to the volume. I wanted to try to give a flavour of the stories and illustrate my thesis about the contemporary supernatural tale, and did so by relating a couple of incidents that had been much in my thoughts, and which seemed to me to show what I conceived to be the difference between the traditional ghost story and the tale of uncertainty.

I have twice, in the last year, visited a supposedly haunted site not far from where I live in rural Bedfordshire: Old St Mary’s, a derelict fourteenth-century church on a hill above Clophill, a picturesque village about thirteen miles to the north of Luton. Old St Mary’s gained a sinister reputation in the 1960s following a spate of desecrations—over a period of several weeks, on moonless nights, graves were broken open and bones disinterred, and the ruins were daubed with disturbing graffiti. It was thought to be mostly aimless vandalism, the work of bored young people aping, but the original violation apparently bore clear signs of a knowledge of the occult and of the practices of dark rites. That time, the skeleton had not been just scattered but deliberately laid out inside the ruin in a pattern associated with the Black Mass, and a Maltese Cross had been daubed on the floor in what was thought, from feathers found strewn about, to have been cockerel’s blood. Afterwards the place became a bugbear for locals, with teenagers from Luton daring each other to visit it at night. Now it is a heritage site and well maintained, but it still has a charge.

The first time I went up to the church, it was dusk, following a grey late autumn day. There were two of us out walking. As my friend and I approached the ruins they were thrown into stark relief when the sun, setting behind them, a ball of orange fissured with red, like the blood-threaded yolk of an egg, dropped below the cowl of cloud. The effect was Gothic. My friend and I wandered about the churchyard for a time, took in the views, then went back down the path towards Clophill. Between Old St Mary’s and the village, the path passes through copse, and as we walked under the canopy of reddening leaves, where all was gloom, my friend and I saw, out of the corners of our eyes, a hand reaching between us. We startled, looked round, but there was of course no one there.

The second time I climbed up to Old St Mary’s, there was a group of us. It was a warm summer’s afternoon, the sun bright and high in a clear sky, the only clouds frothy white streaks, like cuckoo spit. As we approached the top of the hill, a blue van towing a low trailer heaped with junk drove past and pulled up in front of the gates to the churchyard. Two nondescript men, one balding, the other tall, both middle aged and dressed fairly smartly in chinos and linen jackets, like stockbrokers in weekend attire, got out of the cab, leaving the engine idling, and began circling the vehicle. After some moments stretching their legs they wandered off among the graves.

As we neared the van—which spluttered on, the smell of diesel exhaust acrid in the air—we saw, atop the pile of broken things in the trailer, an old cathode ray television, screen smashed, with, in the body of the set, a Murano glass sculpture of a clown, of the kind popular in the ’70s, which now, as the generation that bought and cherished such things dies off, floods charity shops. The clown was set there in that wrecked TV like statues of the Virgin are in roadside niches in southern Europe.

Rounding the van, we saw that the men who’d got out of it were cavorting strangely in the churchyard. The balding was flailing his limbs in some kind of jerky dance and the tall was darting hither and yon. Then he stopped running about and stood before a headstone. We realized a moment later that he was pissing against it. The other kept on dancing. We decided then, without a word between us, not go on up to the church. We were halfway back to the village again, just emerging from the copse, when we heard the van’s engine revving behind us, and it careered past, kicking up clouds of dust, forcing us into the ditch. As the trailer went by, I could swear the glass clown turned its head to look at me and grinned.

I’ve exaggerated some of the details here for effect (though not actually by very much). Two incidents that gave rise to the uncanny. But the first, closer in tenor to the classic Victorian ghost story, was far less disconcerting than the second, which has more in common with the stories of uncertainty found in this volume. We almost expect to see ghostly hands at haunted sites—there’s no real ontological rift. Preternaturally animated Murano glass clowns, we do not anticipate. The other key difference is that in the second story, the actual moment of the supernatural is not as important in creating the effect as the bizarreness of what led up to it—tales of uncertainty often show us a world always already off-kilter. 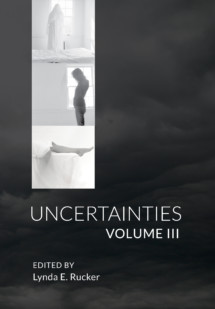