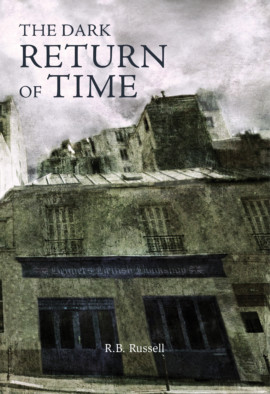 The Dark Return of Time

“I was searching for The Dark Return of Time on the ‘net. It’s odd, but there isn’t a copy for sale anywhere, and it doesn’t turn up on the British Library catalogue, the Library of Congress website, or the Bibliothèque Nationale.”

The past doesn’t always stay where it should. It is as though somebody, or something, is forever trying to bring it painfully into the present.

Flavian Bennett is trying to leave his past behind when he goes to work in his father’s bookshop in Paris. But a curious customer, Reginald Hopper, is desperate to resurrect his own murky origins. Hopper believes that a rare and mysterious book, The Dark Return of Time, may be the key to what happened before he arrived in Paris. In this quiet thriller by R. B. Russell, the futures—and pasts—of these two men will soon cross.

“The Dark Return of Time” 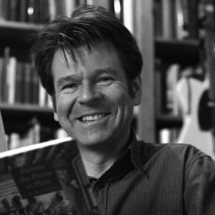 R. B. Russell is the author of three novels, three novellas and four short story collections, along with a few books of non-fiction. With his partner, Rosalie Parker, he publishes classic works of curious and macabre fiction under the Tartarus Press imprint.

“R. B. Russell’s The Dark Return of Time is a short thriller that opens in a shop selling second-hand books in Paris. What could be better?” – The Washington Post

“Russell’s smart, dark novel is thrilling, sensuous and memorable. It will write itself into your mind, and afterwards, you may well ponder if there is actually much of a difference between thinking—and reading.” – The Agony Column

“Russell is one of those quiet conjurors whose uncanny moments are often three-quarters-hidden behind a slatted blind of noonday normalcy.” – The Pan Review

“[The Dark Return of Time] is a real pleasure to read due to the elegant narrative style, the allusive and disturbing atmosphere and the author’s ability to question reality . . . ” – Gumshoe Review

“I am drawn satisfyingly into this book’s intriguingly, deceptively simple-prosed plot . . . A blend of the page-turning and the lingering.” – Real-Time Reviews

“While not a supernatural tale within the strict definition of the term, this short novel offers the reader a world that is slightly out of kilter, if not quite that of a nightmare. I’d recommend it to anyone who likes intellectual thrillers with a touch of the outré.” – Supernatural Tales 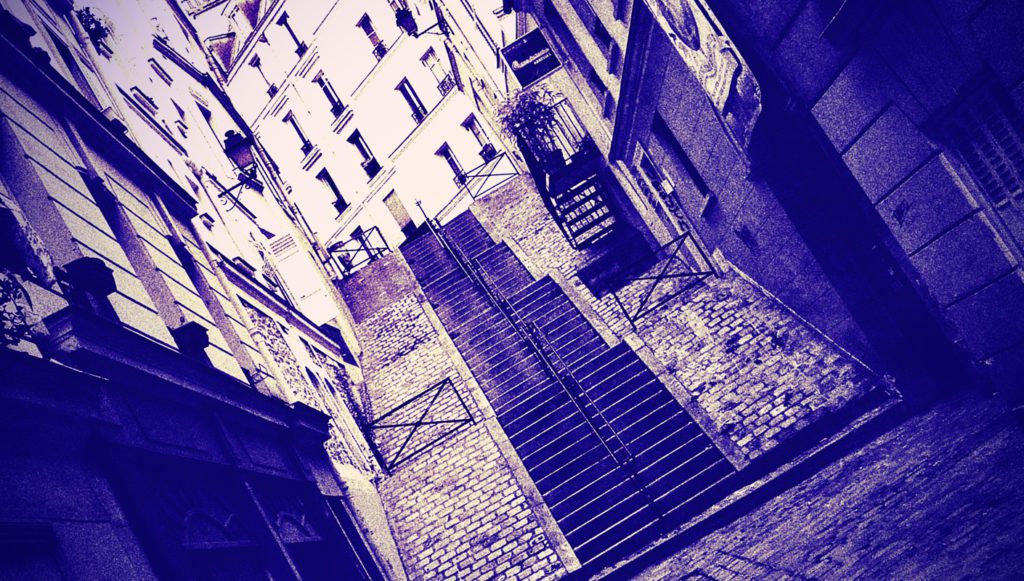 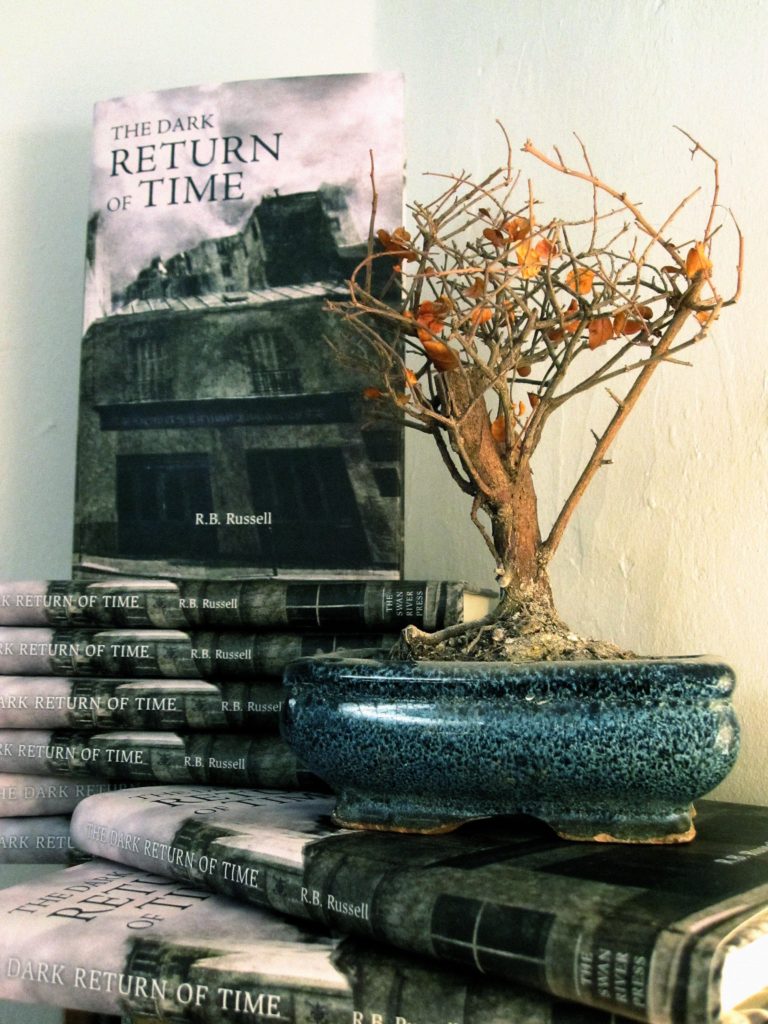 Brian J. Showers: The events in The Dark Return of Time are primarily centred on a British second-hand bookshop in Paris. Over the course of the story details of the shop are sketched with a loving familiarity. To what extent is your new novella based on your own experiences with the second-hand book trade?

R. B. Russell: The second-hand bookshop in The Dark Return of Time is a rather idealised version of all the bookshops I’ve known and loved over the years; it is the shop I would have run if I had ever entered the trade. I did a little book dealing in the early days of the internet, but I am at heart a collector, and collectors should never be dealers (they don’t like parting with their stock!) I gained a fair knowledge of the trade during the years I compiled a guide to the values of first editions, although some book dealers viewed my guide with a certain degree of suspicion. The best bookshops are a haven of calm and civilisation, where a customer can relax and find that time ceases to behave properly. I’ve known a great many book dealers and I have found most of them to be wonderfully eccentric and unworldly, with a great desire to share their knowledge. It is such a great shame that so few proper bookshops now exist. My favourite bookshops of all time were N.F. Brookes’s shop on Queen’s Road, Brighton, and YSF in Sheffield, both long gone.

BJS: The protagonist Flavian Bennett, who works for his father in the bookshop, is very self-conscious regarding his taste in books and art. Is this a reflection of how you see a certain breed of reader/collector?

RBR: I think we can all be a little snobbish about literary taste, and other people’s apparent lack of it! Flavian is young, and certainly shares this failing, but he is more annoyed by the idea of somebody trying to use their library to impress. Flavian is like all those who are bitten by the first edition bug, and he looks down his nose at later editions, especially those issued by book clubs. But, for all of his failings, Hopper [Dark Return’s antagonist] admits his lack of education and knowledge, and is willing to be guided by people he trusts. He is actually reading the books he buys, which elevates him, in my mind, above those collectors who dare not open their books for fear of damaging and devaluing them.

BJS: Is Flavian based on yourself or an amalgamation of people you know? And, dare I ask, does Flavian’s client, the sinister book collector Mr. Hopper, have any real world inspiration?

RBR: Flavian is entirely fictional, as is Mr. Hopper, I am pleased to report! I liked the idea of the latter looking like an East-end gangster, but dressed up in the affected, dated clothes of a dandy . . .

BJS: The Dark Return of Time is set entirely in Paris, though one that thankfully avoids a perpetual view of the Eiffel Tower—do you have a particular affinity for the city?

RBR: I’ve lived most of my life in the countryside (I did spend six years in Sheffield), but I have always been fascinated by cities as settings for fiction; there seem to me to be endless possibilities not only for human interaction but also alienation. I visited Paris a couple of times as a teenager and the atmosphere of the place always stayed with me, especially the area around the Place des Abesseses where The Dark Return of Time is partly set. It is an entirely romantic, fictional Paris that I have written about, filtered through memory and nostalgia. By making my central character an outsider, a foreigner, who is essentially passing through, I hope I will be forgiven if I write about Paris as a tourist might.

BJS: How do you think this sort of exotic displacement, like a foreigner in a big city abroad, works to increase the sense of the strange and weird in the novella?

RBR: The feeling of “foreigness” is one we can all relate to, making us less certain of the world around us. I usually feel as though I am writing “realist” rather than “strange” or “weird” fiction; in the real world I am wrong-footed, disturbed and upset by phenomena that is apparently quite everyday and natural—it is just that I can’t explain it. When one is abroad there are so many differences, for geographical and cultural reasons, that it is possible for the more subtle manifestations of the weird to slip by unnoticed.

BJS: What were the literary influences for Dark Return?

RBR: All of my reading over the years has some influence, I am sure. I sat down and started writing The Dark Return of Time immediately after reading Djin by Alain Robbe-Grillet, which is a very odd book. It is also set in Paris, where nothing is quite as it seems, and I am sure it was an influence. But one of my all-time favourite books is Roland Topor’s The Tenant, also set in Paris, and that has to be in The Dark Return of Time, I am sure. I greatly admire Machen, Aickman and others, but I’ll leave it to others to decide whether they are an influence.

BJS: The supernatural elements in this novella are subtle, but alluring. In particular, The Dark Return of Time, a book that becomes increasingly uncanny, in part two of the novella. What’s the inspiration behind this?

RBR: The Dark Return of Time is inspired by all the “ghost” books out there, some of which are more frightening than others. I wouldn’t want to stumble upon Alhazared’s Necronomicon any more than I would the books of Rosie M. Banks from Wodehouse’s Eggs, Beans and Crumpets, but an original edition of Fungoids by Enoch Soames would be nice to find, and if anybody can supply me with a copy of Wayside Bundle by Constance Hargreaves I would be very grateful. A friend is haunted by a book called Why I Am Not a Farmer, and should take heart from the fact that most “ghost” books manifest themselves eventually. One day I will find Malingering by S. Holmes (I once dreamed I had found his Practical Handbook of Bee Culture in a bookshop.)

BJS: The Dark Return of Time feels a bit like a literary mystery. Like we’re given pieces to the puzzle, but are not quite unsure how they fit together. And yet the story is satisfying in its conclusion. How do you strike this balance?

RBR: I’m pleased you think that I’ve struck the balance, but I don’t expect everyone to agree. Different readers seem to like their loose-ends more or less tidied up, but real life is never neatly resolved. Not only are some things never explained, but perfectly decent, rational people quite often have entirely different memories of the same events, and contradictory interpretations of them. Fiction is often harder to make convincing than real life (where coincidences abound and the most unlikely events regularly occur), but the reader should feel in a work of fiction that the journey has been taken as far as it can be reasonably told.

BJS: This isn’t your first novella. You also wrote Bloody Baudelaire, which was collected in Ghosts, and I know from our conversations you’ve written at least one more. Is there something about this length or story that attracts you?

RBR: Any story has a natural length, and sometimes keeping to a lower word-count just isn’t possible. I love short stories for Poe’s “Unity of Effect”, but more complex themes and relationships need to be given the time and space to develop. A novel, though, is a different beast entirely . . .

BJS: Anything else we should keep an eye open for from you in the future?

RBR: Another novella, I hope, although the publisher who has accepted it has a very full programme for the next eighteen months or so . . . 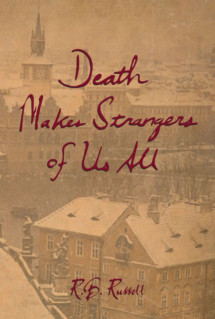 Death Makes Strangers of Us All 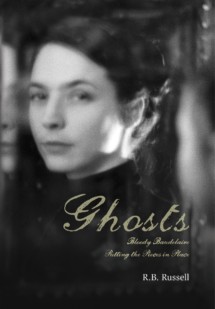