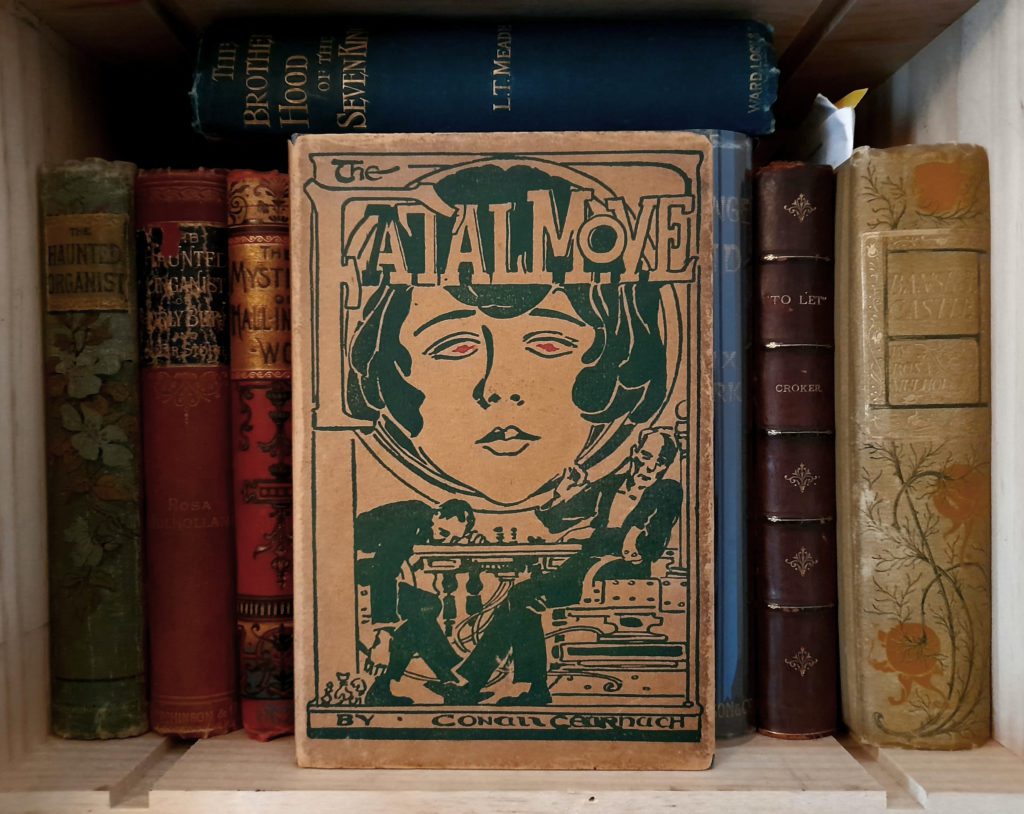 A few years back I wrote a short piece on how we put together Lafcadio Hearn’s Insect Literature (2015) from a design point of view. There are often embedded design details of significance in our books—the sort of things you might not notice until they’re pointed out and the various meanings explained. With the imminent publication of The Fatal Move by Conall Cearnach, I thought it might be a good time to write another such essay looking at how we designed this particular book.

Irish author F. W. O’Connell (1875-1929)—who often published as “Conall Cearnach”—was brought to my attention by Reggie Chamberlain-King, probably sometime in 2017. Chamberlain-King had been pitching to me Irish writers to consider for The Green Book’s ongoing profile series “Irish Writers of Gothic, Supernatural, and Fantastic Literature”, and Cearnach was among them. You can read the resulting biographical overview in Issue 11.

During his lifetime, Cearnach was known as the author of two Irish grammar books, A Grammar of Old Irish (1912) and Irish Self-Taught (1923), as well as for his broadcasts on 2RN, Ireland’s first radio broadcasting system. (It’s these broadcasts that I suspect formed the contents of Cearnach’s three essay collections.) But the primary reason for Cearnach being considered an Irish fantasist in The Green Book is for a slim collection of short stories he published in 1924: The Fatal Move and Other Stories (M. H. Gill & Son, Dublin). Chamberlain-King describes the stories as “ranging from the darkly macabre, to the speculative, to the absurd”. I had to track down a copy.

When the slim volume arrived—the first edition is only 96 pages—I was even more intrigued by the story titles: “The Vengeance of the Dead”, “The Homing Bone”, “Professor Danvers’ Disappearance” . . . I found among them a supernatural thriller, a locked-room mystery, a conte cruel, and even a “delightfully comic dystopia” in which Bolshevik Russia had taken over England, wiping out the English language. Eventually I reprinted “The Fiend that Walks Behind”, a Jamesian ghost story, in The Green Book 15, where it drew a favourable response. I grew to quite love this quirky little book, perhaps not a lost classic, but certainly a quirky gem of Irish literature, which I decided was worthy of inclusion in our 2021 publishing schedule. Naturally, Reggie Chamberlain-King provided the introduction, greatly expanded from his previous profile in The Green Book, and probably the lengthiest piece written about Cearnach to date.

So back to the book itself: the first edition copy of The Fatal Move that I managed to track down was complete with a somewhat grubby (and fragile) fawn paper wrapper. Depicted on the cover in green ink were two weary chess players, one slumped over their game board, both overseen by the disembodied head of an Edwardian beauty with red pupils—all this being an illustration from the title story.

While the name of the artist is neither listed in the book, nor in any bibliography I could find, my own copy bore two interesting inscriptions on the front endpaper. At the top, in black ink: “To the Artist with the Publisher’s Compliments, Dec. 1923”; below that, in red ink: “From Tom Grogan, as a specimen of his productions, le hárd-cion [with great affection]”. Certainly this established the identity of the artist, but begged the further question: Who exactly was Tom Grogan? A “Father Thomas Grogan” is registered at the Dublin Metropolitan School of Art in 1919, and is a possible candidate, but apart from that the trail is cold. Any amateur art sleuths out there want to take up the challenge?

I noticed something else while putting together The Fatal Move. The eyes of the woman on the jacket are blank on all the other copies I was seeing for sale on the internet. Mine would seem to be unique with its crimson glare, which, until this realisation I had thought was part of the original design as opposed to added. Some of you might already have made the next leap in logic, but I confess, it took me a moment before I got there: the red ink with which Tom Grogan made his inscription is the same ink used on the jacket to enhance the eyes. In other words, the cover of my copy was embellished by the artist himself.

Usually when we reprint a book, I like to commission a new piece of art so as to modernise the edition—though always with sympathy to the text’s history, of course. But for The Fatal Move we decided to retain Tom Grogan’s original artwork, though not without a handful of minor alterations. First, you’ll notice that the letters in Conall Cearnach’s name are crowded together on the cover of first edition. I asked our designer Meggan Kehrli if she could fix this, which she did beautifully, rendering the author’s name more clearly. Next, we decided to print the image in a metallic green ink, which should give the jacket a striking look (Pantone PMS 8722C, for those who like knowing this sort of thing). The book isn’t back from the printer yet, but I hope it looks good. Finally, we decided, for our new edition, to retain Tom Grogan’s red eye embellishment, an indelible addition to my own original copy, now embedded in Swan River’s updated design. We hope Tom Grogan would approve.

As for the pattern we’re printing on the book’s case, Meggan lifted that from Cearnach’s essay collection The Age of Whitewash (1921). This also seems appropriate as Chamberlain-King wanted to include in The Fatal Move a selection of the author’s more outré non-fiction, hoping to give more insight into Cearnach’s life and milieu. Using the pattern from The Age of Whitewash is a subtle nod to this consideration.

And there you have it—a bit of insight into what goes into putting together the book as a physical object, readying the stories so that a new readership might discover them. I’m excited to see what the book will finally look like when it arrives back from the printer within the next few days. Our limited edition hardback edition will be the first time The Fatal Move has been reprinted since it’s first outing in 1924—nearly one hundred years ago.

So have you ordered a copy yet? Have you read Cearnach already? Or maybe there’s something else about this book you’d like to know more about? Drop us a line or leave your comments below.

If you liked this essay and want to support an independent Irish press: