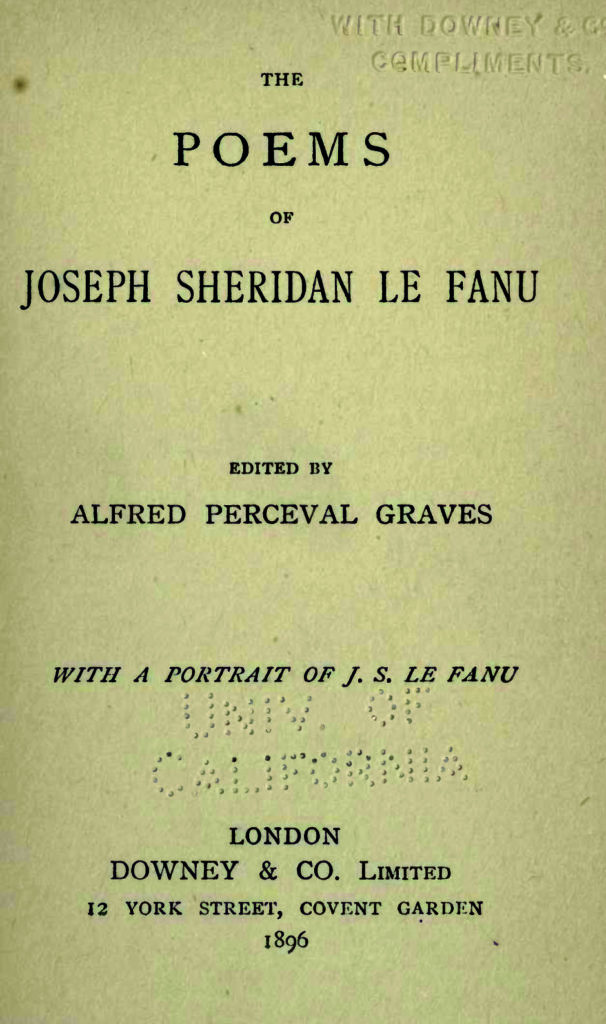 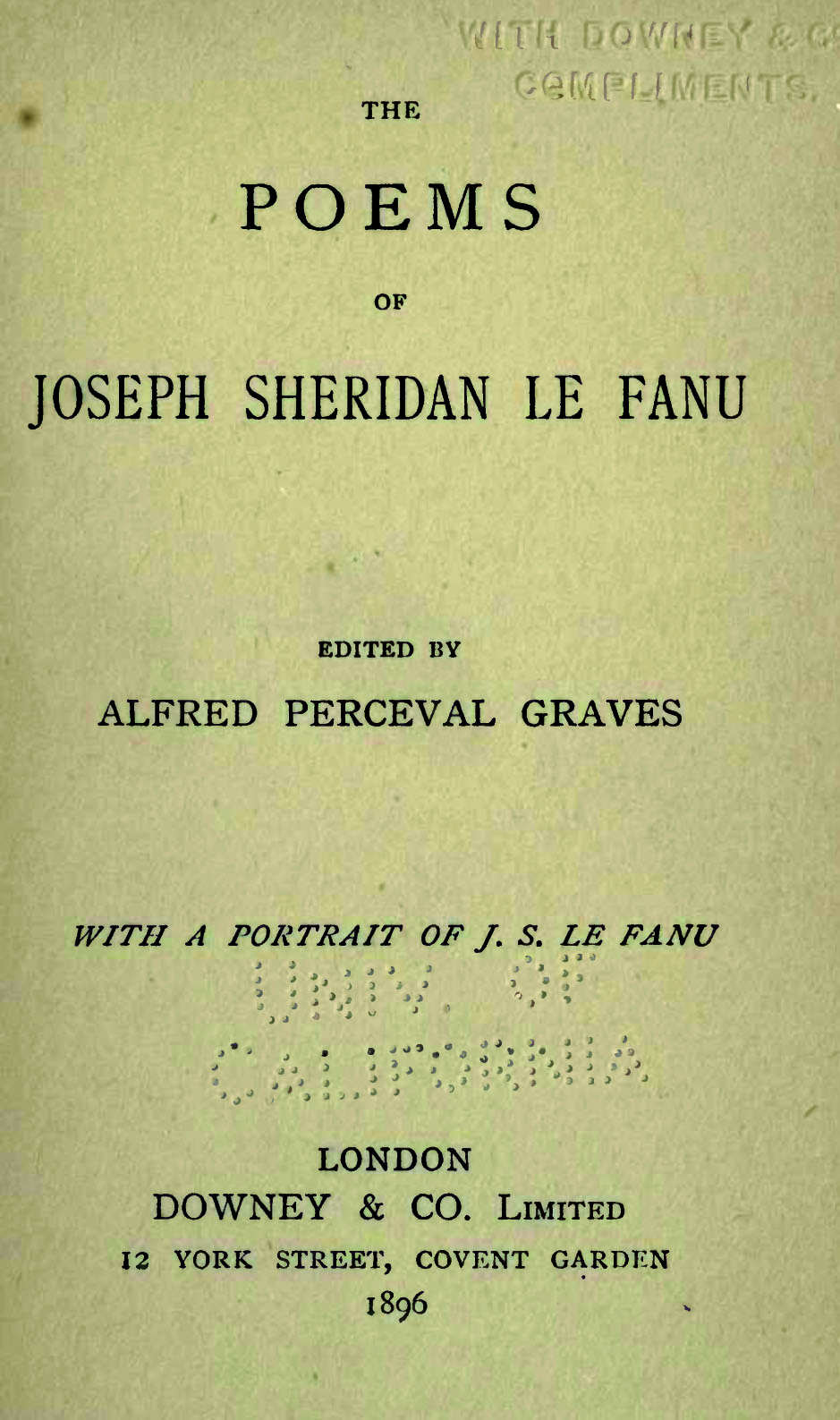 As today is Poetry Day here in Ireland, I thought I’d share a poem by Joseph Sheridan Le Fanu (1814-1873). If Le Fanu is one of Ireland’s overlooked authors (when remembered it is mainly for his ghost stories and sensation novels), then as a poet he is certainly almost entirely forgotten. Though this was not always the case.

It wasn’t until over twenty years after the author’s death that the Poems of J.S. Le Fanu (London: Downey, 1896) were collected under the editorship of family friend Alfred Percival Graves. But as Graves indicates in his introduction, Le Fanu had been a lifelong poet, and was writing “brilliant doggrel” as a young man, the only surviving example being a valentine to “a very pretty” Miss K——:

“Your frown or your smile make me Savage or Gay / In action, as well as in song; / And if ’tis decreed I at length become Gray, / Express but the word, and I’m Young.”

One of Le Fanu’s earliest successes as a poet was “The Ballad of Shamus O’Brien”, though curiously his authorship was, even at the height of the poem’s popularity, not known. In fact, it was commonly attributed to Samuel Lover (1797-1868) who popularised the ballad in America in 1846. In a letter to Le Fanu’s brother William, Lover wrote:

“In reading over your brother’s poem while I crossed the Atlantic, I became more and more impressed with its great beauty and dramatic effect—so much so that I determined to test its effect in public, and have done so here, on my first appearance, with the greatest success.”

So enduring was the ballad’s popularity that it was adapted as an opera by Charles Villiers Stanford in 1895. Long out of print in the twentieth-century, Swan River Press issued in 2011 a new edition of Le Fanu’s poetry as a limited edition hand-bound booklet, copies of which are available here.

“Shamus O’Brien” first saw print in the July 1850 issue of the Dublin University Magazine, a magazine to which Le Fanu is now intricately connected as both contributor and editor. And even here it appeared anonymously, as many of his contributions did. A brief introductory note explains the poem’s popularity with public recitations, and notes the misattribution to Samuel Lover.

And so, for Poetry Day Ireland, we wish to share with you Joseph Sheridan Le Fanu’s “Ballad of Shamus O’Brien” as it first appeared in the Dublin University Magazine: 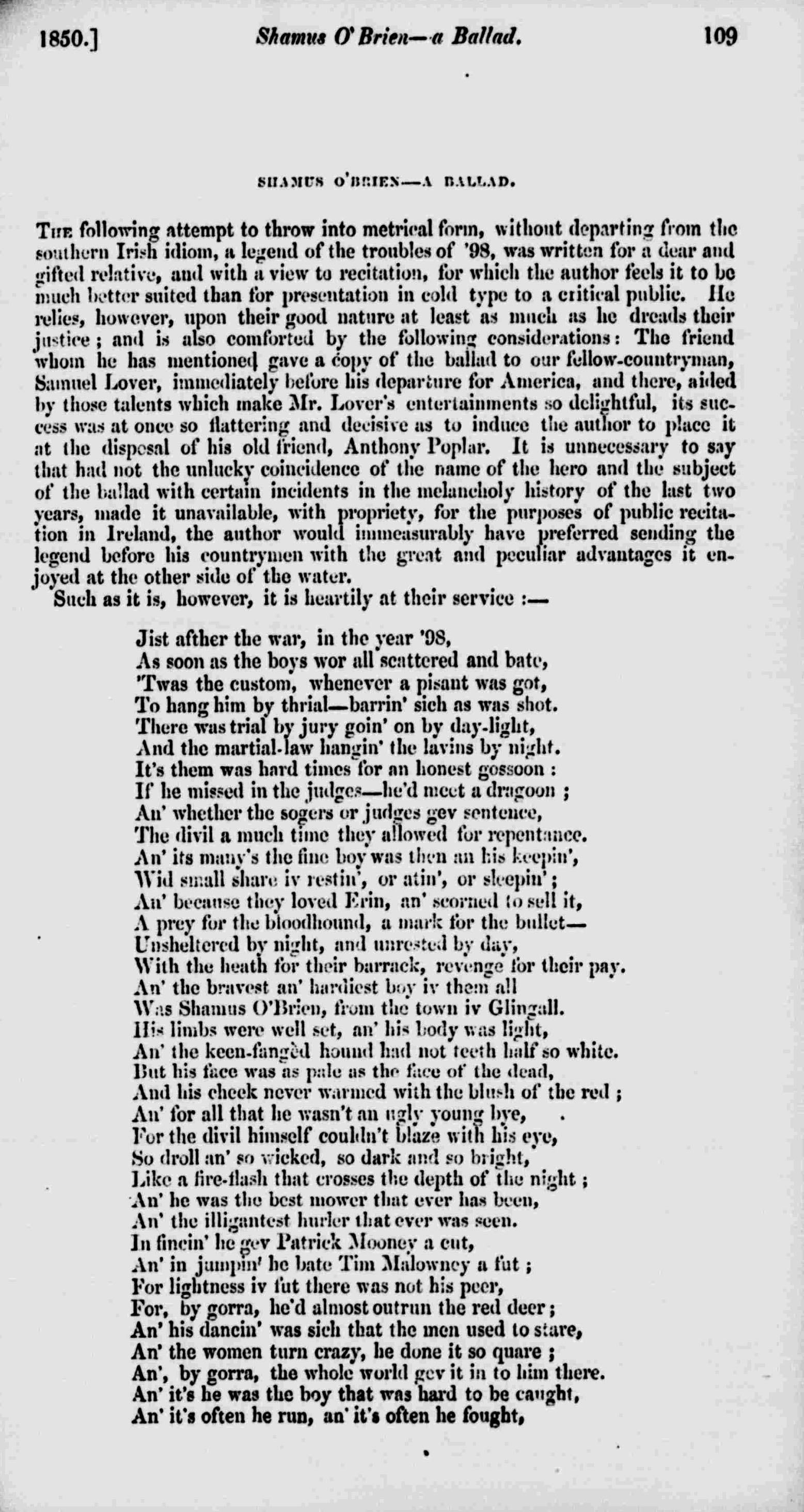 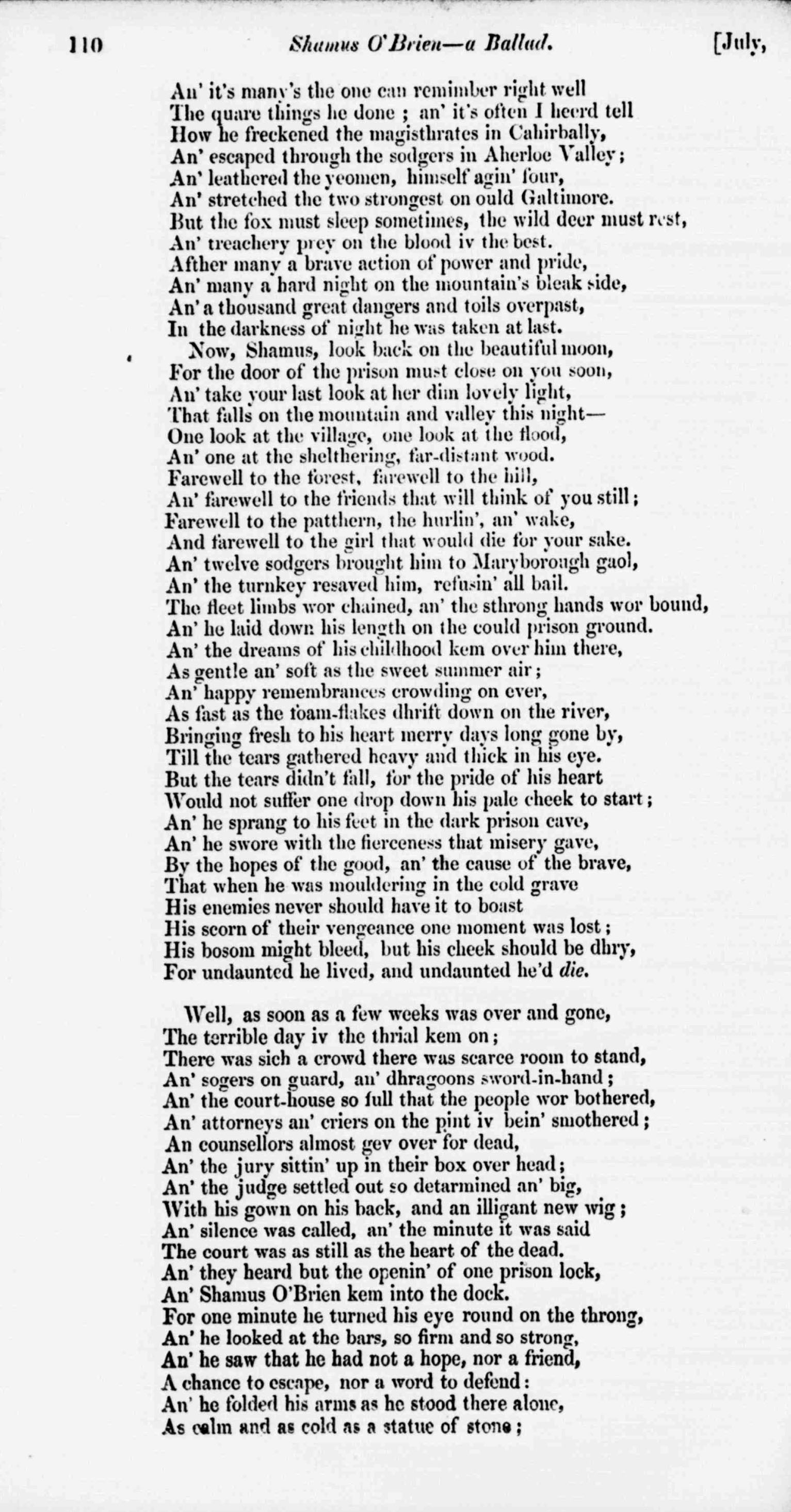 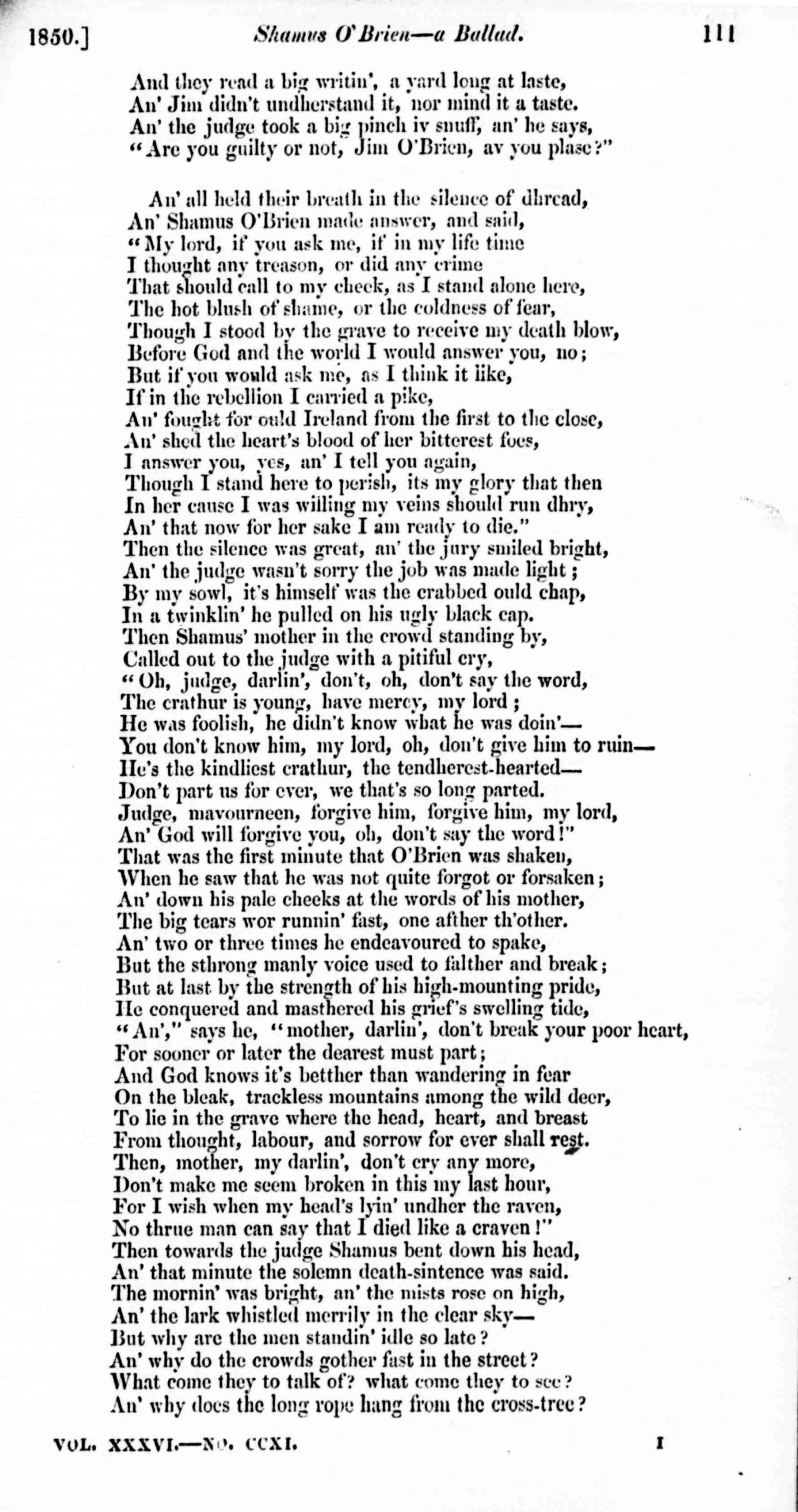 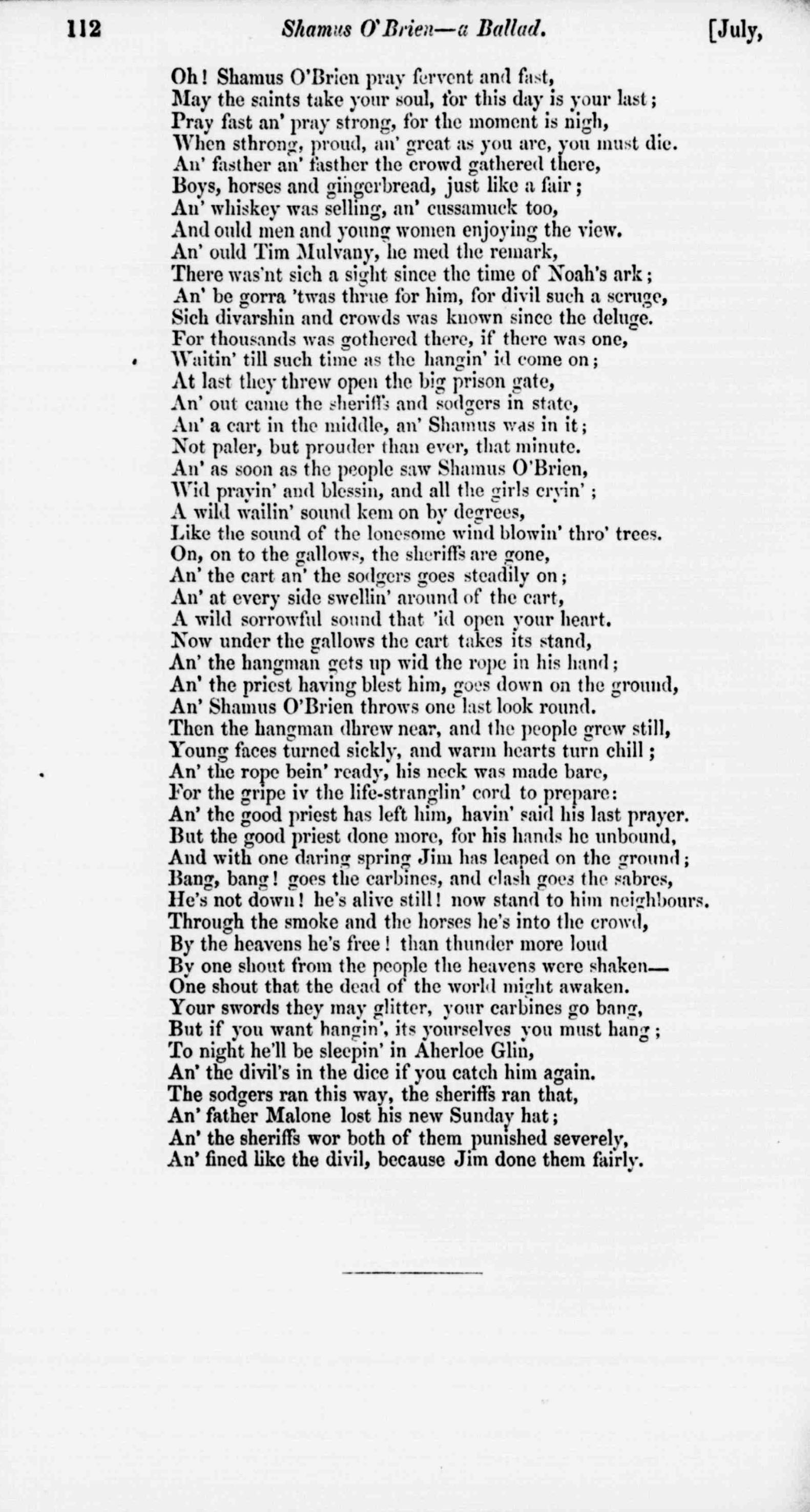