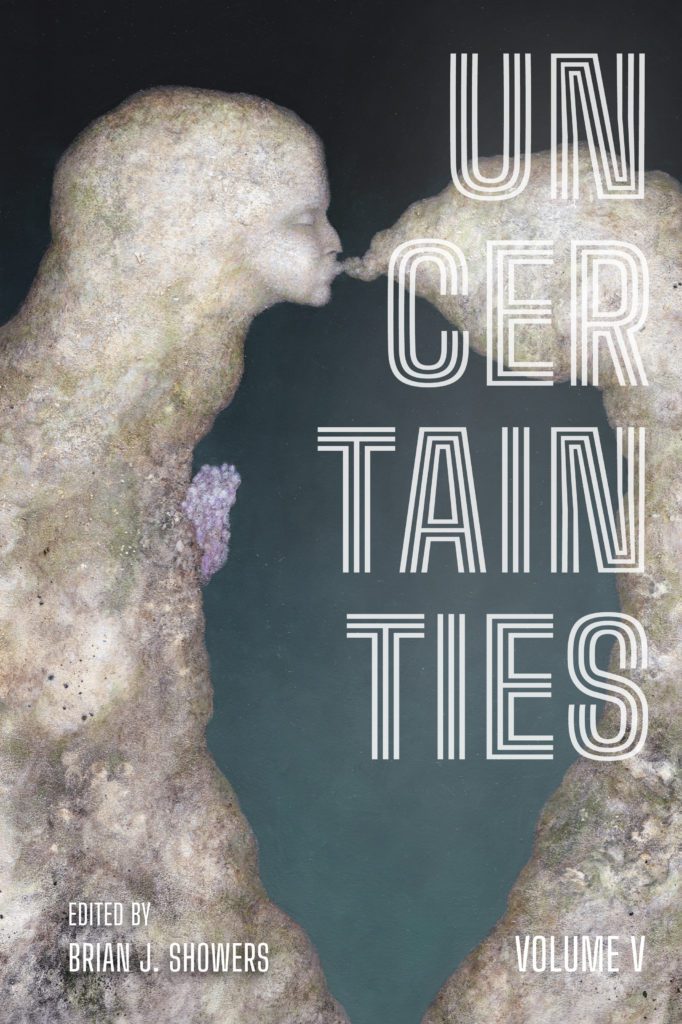 “Horror is not a genre like the mystery or science fiction or the western
. . . Horror is an emotion.” – Douglas E. Winter

“That didn’t scare me.” This level of criticism grates my sensibilities. That didn’t scare me. It’s the sort of comment you overhear when leaving the cinema or that you might witness among a torrent of social-media posts, not generally known for their insight or elucidation in the first place. It’s not even the brevity of this comment that bothers me, but rather that this grunt seems to convey a shallow understanding of horror: “That didn’t scare me.”

As a life-long connoisseur of horror, I seldom experience genuine “fear” while reading (or viewing)—that adrenaline-fuelled dread termed “art-horror” by Noel Carroll in The Philosophy of Horror. It does happen to me on occasion though, this sense of frisson: I remember the worrying, childhood anxiety of the doomsday clock in John Bellairs’s The House with a Clock in Its Walls, that horrible cosmic grandeur I experienced the first time I turned the pages of William Hope Hodgson’s The House on the Borderland, or the overbearing sense of inexorable supernatural fate in Shirley Jackson’s The Haunting of Hill House.

But if invoking this feeling of fear is such a rare experience—a sort of holy grail of reader reaction—then you might rightly wonder why I carry on exploring this particular section of the library? Am I not effectively one among the crowd, professing with a sneer, that didn’t scare me? It’s a reasonable question. Put another way: If horror doesn’t get you scared, then what are you getting?

In his introduction to the anthology Prime Evil (1988), editor Douglas E. Winter makes an observation, often repeated, what he calls “an important bit of heresy”: “Horror is not a genre like the mystery or science fiction or the western . . . Horror is an emotion.” This is a good place to start: horror is an emotion, and so the success or failure of horror literature is predicated on eliciting an emotional sensation in the reader. Similar to how a joke might be deemed a success or failure depending on the laughs. But there’s got to be more to it than that.

Consider a grand piano, onyx black, appropriately festooned with cobwebs and candelabra bedecked with dripping red candles. Imagine being allowed to play only one note, probably down the far left end of the instrument where the theme from Jaws is usually played. Now imagine that the sole way to enhance the effectiveness of this note is to hammer that one key harder and harder. For many, this is horror. Hammering that single key. Lots of people love that one pounding note too, and feel cheated if they don’t get that adrenaline rush; that didn’t scare me. Sure, that single note might be novel for a moment, sometimes even effective in a particular context, as the musician changes speed or intensity. But you’ll forgive me if I tend to feel overwhelmingly bored with this sort of concert.

“Horror is an emotion,” Douglas E. Winter tells us. I would respectfully like to amend that assertion. Horror is a range of emotions. And each of these moods, if they are to be successful, must be cultivated differently. We know that good horror is rarely just a single note. There are far more keys on that piano—and they’re all elegantly tuned. To borrow the subtitle of F. W. Murnau’s Nosferatu, the genre is eine Symphonie des Grauens—a symphony of horrors.

There seems to have been a proliferation of horror-related literary descriptors in the early- to mid-twentieth century (or at least an increasingly formalised awareness of them): cosmic, weird, numinous, uncanny, strange, among others. I believe these words are of merit, not because they define sub-genres, but because they reflect attempts to describe particular nuances of affect (emotional responses) to be found in the “ghost story”—the dominant mode of horror in the late nineteenth century, itself rooted in the gothic tradition. Despite the common trope of the wailing bedsheet, the ghost story has always been quite diverse and adaptable. As is occasionally observed, the “ghosts” in the works of M. R. James are often not ghosts at all, but demons and other such denizens; while the stories of Joseph Sheridan Le Fanu and Henry James practically beg for the qualifier “psychological” so as to set them apart from the less imaginative chain-rattling fare. And yet, even though Algernon Blackwood himself called “The Willows” a ghost story, that attribution would seem a wholly inadequate description for the troubling sentiments that masterful tale evokes. Who can blame Lovecraft for writing an entire treatise pondering the aesthetics of the weird or Robert Aickman for labouring the strange?

This attempt to describe dominant effects found in horror storytelling continues apace; sometimes these descriptions are celebrated, other times they’re inelegantly stated, occasionally there’s some sort of backlash. Current nomenclature includes “quiet horror” or “elevated horror”, “horror adjacent”, “new horror”, and the ostensibly respectable “thriller”. But surely horror means horror. It doesn’t need your fancy terms. Perhaps the worry is that defining a “sub-genre” will limit creativity, possibly that it’s just a marketing ploy, or, worse still, a declaration of vogueishness, a demonstration of an otherwise unspoken desire to be au courant. Or maybe outsiders discovering good horror ruin the mystique of the insular and supposedly marginalised horror geek who has been reading Thomas Ligotti this whole time anyway.

As someone who thinks often about the mechanics of horror storytelling, it makes sense to me that we recognise and try to describe the wide-ranging nuances of emotional sensations available to writers of horror. I believe understanding this diversity makes horror literature a stronger, richer, and more enjoyable pursuit.

Over the years I’ve written down some words that I’ve come to associate with the various emotional resonances found in horror literature. Take a moment to read through them. Think about stories you’ve read that evoke these sensations to varying degrees of success, and how these ideas differ from one another:

I have not attempted to arrange these words in any sort of order. I’m not sure I would know how. Nor would I feel confident to state that this list is complete; no doubt you can think of more. Call these words what you’d like—sub-genres, modes, atmospheres, moods, sensibilities—but they all describe, directly or indirectly, discreet emotional sensations that a skilled writer can elicit from a reader. It also stands to reason that this variety of effects requires a broad range of appreciative sensibilities—though I understand that not everyone will respond equally to each of these words. Still, there are plenty of emotional sensations available to the skilled writer, the adrenaline rush of fear being only one of them. And this sensation alone is insufficient to judge the vast scope of horror. So much for “That didn’t scare me”.

Numerous essayists over the centuries have attempted to define some of these modes, to delineate their core attributes and limits. Anne Radcliffe made an early attempt at that classic bifurcation, differentiating terror and horror: “the first expands the soul and awakens the faculties to a high degree of life; the other contracts, freezes and nearly annihilates them”; to these twin poles, Stephen King added revulsion (the “gross-out”, he called it). Thomas Burke gives us the sublime, when “the mind is so entirely filled with its object, that it cannot entertain any other, nor by consequence reason on that object which employs it”; while Freud sets out a reasonable starting point for the uncanny (“that species of the frightening that goes back to what was once well known and had long been familiar”).

Though the weird is often associated with Lovecraft’s examination of supernatural horror in literature, I like Mark Fisher’s more recent philosophical definition in The Weird and the Eerie: “that which does not belong”; and of the eerie: the “failure of absence” or the “failure of presence”. (Fisher also helpfully tells us that the weird and the eerie need not necessarily be aligned with fear either, thank you very much.) The well-known rules for the ghost story proper were set out by M. R. James; so too does Edith Wharton give insight in her preface to Ghosts: “What the ghost really needs is continuity and silence”—although she also notes, “the more one thinks the question over, the more one perceives the impossibility of defining supernatural events”.

It’s true that many have tried to put words to these nuanced facets of horror. Certainly, some overlap or work in tandem, while others command entirely recognisable sub-genres on their own. We can look to Arthur Machen for the mystical (“Omnia exeunt in mysterium”), to Aickman for the strange (“it must open a door where no one had previously noticed a door to exist”), or to Joyce Carol Oates for the grotesque (“a blunt physicality that no amount of epistemological exegesis can exorcise”). There are whole books written on the subject by Dorothy Scarborough, Montague Summers, Peter Penzoldt, Devendra P. Varma, Julia Briggs, Jack Sullivan, Glen Cavaliero, S. T. Joshi—you may not always agree with their conclusions (isn’t that half the fun anyway?), but all are attempting to give names to the various effects a “horror” story can elicit.

Which brings us to the present volume, the fifth in a series of unsettling tales. Believe it or not, Uncertainties is a themed anthology. The remit was nothing so superficial as vampires or zombies or folk horror or Cthulhu (only in dustbowl Oklahoma this time), but rather to exhibit horror’s myriad nuances, to open up strange vistas of unsettling possibilities and other-worldly ideas, to commune with intrusions from the outside and those disquieting gestations from within. “Ghost stories,” as Elizabeth Bowen observed, “are not easy to write—least easy now, for they involve more than they did.” But these twelve writers take up the challenge, each in their own way, with expert awareness of the genre’s limitless possibilities.

Algernon Blackwood put it well in “The Willows”, a story that’s caused me many sleepless nights in terrible awe of the unknown: “ ‘There are things about us, I’m sure, that make for disorder, disintegration, destruction, our destruction,’ he said once, while the fire blazed between us. ‘We’ve strayed out of a safe line somewhere.’ ”

So you can call these stories whatever you’d like: weird, strange, eerie, uncanny . . . I call them Uncertainties.

If you liked this essay and want to show
your support for independent press:
Buy a copy of Uncertainties 5.