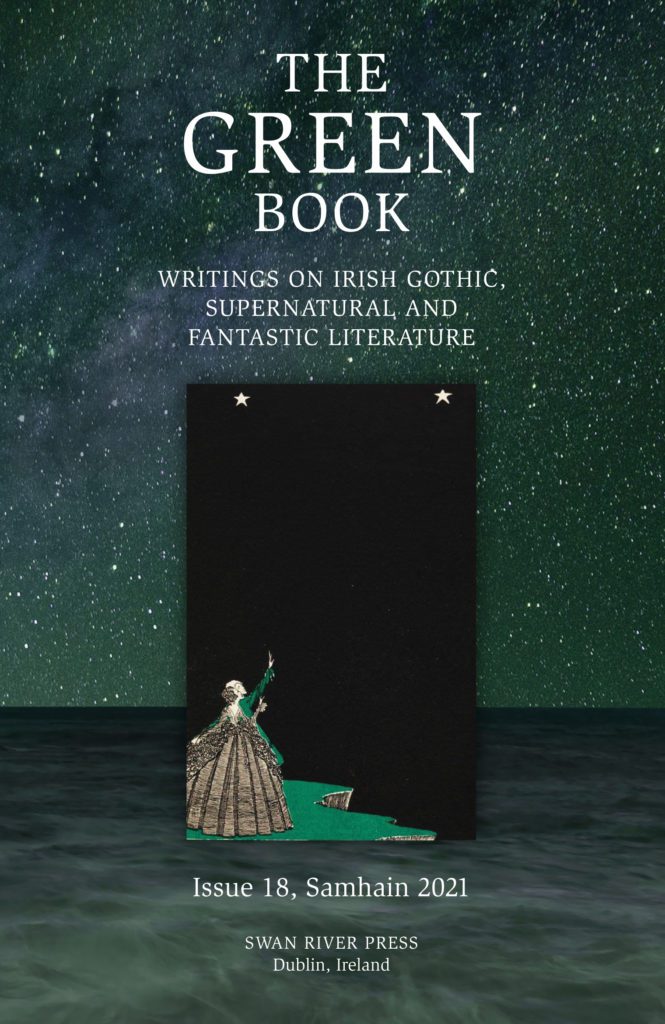 Buy a copy of The Green Book 18

This issue is another selection of profiles from our tentatively named Guide to Irish Writers of Gothic, Supernatural and Fantastic Literature. The keen-eyed will spot one name that might seem out of place: Harry Clarke (1889-1931). Clarke, of course, was not a writer, but an artist who worked in watercolour, pen and ink, and stained glass. As an illustrator, Clarke put his indelible mark on literature of the macabre and fantastic. His best-known illustrations are those accompanying Edgar Allan Poe’s Tales of Mystery and Imagination (1919/23), though his illustrations for Andersen, Perrault, and Swinburne also bear hallmarks of the strange. So too do goblins and grotesques leer from the corners of his stained glass work. Writing in The Irish Statesman on Clarke’s illustrations for Goethe’s Faust, the poet A.E. was clearly taken with the artist’s power:

“Nothing in these drawings represents anything in the visible world: all come from that dread mid-world or purgatory of the soul where forms change on the instant by evil or beautiful imagination, where the human image becomes bloated and monstrous by reason of lust or hate, the buttocks become like those of a fat swine, and thoughts crawl like loathsome puffy worms out of their cells in the skull. Shapeless things gleam with the eye of a snake . . . Here the black night is loaded with corrupt monstrosities, creatures distorted by lusts which obsess them, which bloat out belly or thighs, suck in the forehead, make the face a blur of horrid idiocy or a malignant lunacy. We shiver at the thought that creatures like these may lurk in many a brain masked from us by the divine image.” (14 November 1925)

It is all the more pitiable that Clarke never illustrated an edition of Dracula—he was unable to come to an agreement with Bram Stoker’s estate. What we are left with is not only a remarkable body of work, but also hints to what might have been: other unrealised projects include Baudelaire’s Les Fleurs du Mal and Huysmans’ À Rebours.

Clarke is rightfully listed in Jack Sullivan’s Penguin Encyclopedia of Horror and the Supernatural (1986), and so I felt, given his impact on macabre literature, it was only proper to feature a profile of this remarkable artist among our own pages. Naturally, you’ll find a Clarke illustration on the cover of this issue, and his “Mephisto” can be found on the cover of Issue 6.

This issue also features profiles on George Croly—whose Salathiel may well have borne influence on Stoker’s Dracula (see also “Who Marvels at the Mysteries of the Moon” in The Green Book 14)—and a much-anticipated entry on Fitz-James O’Brien, who is surely a pillar of Irish genre fiction; while Yeats and Lady Gregory invoke in their words the long shadow of the Celtic Twilight. As always, I hope you’ll discover writers who might be lesser known, like the Banims and the Barlowes, or those whose contributions to genre might be unexpected, such as the Longfords and Iris Murdoch. Whatever the case, I hope you find new and exciting avenues to explore.

Want to catch up on back issues? We have a special offer.