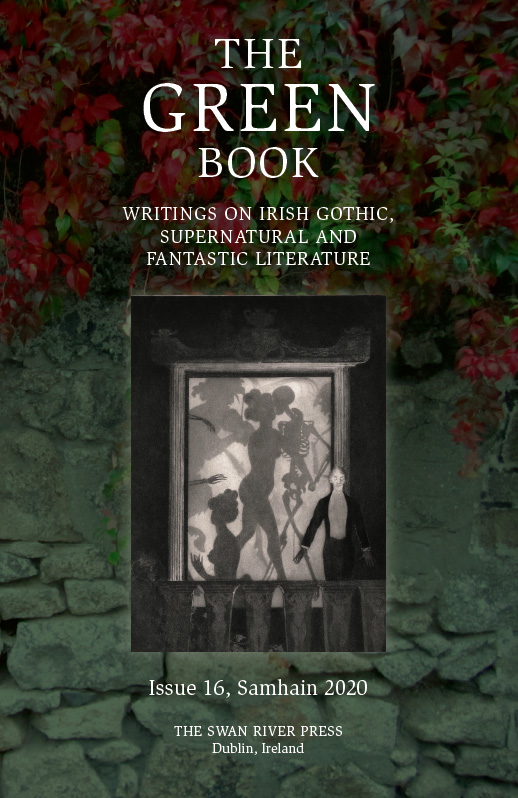 Here we are, after a brief hiatus, with the continued serialisation of the Guide to Irish Writers of Gothic, Supernatural and Fantastic Literature, which I am co-editing with my long-time collaborator Jim Rockhill. (How many years has it been now, Jim?)

This is a project we started work on sometime in 2017 — although it’s something we had talked about for longer than that. Our goal is to create a resource for both readers and scholars, not unlike E. F. Bleiler’s Supernatural Fiction Writers (1985), showing the rich extent of Ireland’s contributions to supernatural literature and its related genres. The first entries appeared in Issue 11, back in 2018, and continued through Issue 12 and Issue 13. In the “Editor’s Notes” for those issues you’ll also find more details on the background of this project, plus how we as editors have set about defining the criteria to guide us through such an enormous task.

It’s been three years now, and, near as I can reckon, we’re somewhere over the halfway mark. When we initially embarked on this journey, neither Jim nor myself quite realised the scope of the undertaking. Perhaps it’s good that we hadn’t as we might have been instilled with a deep sense of daunting fear and put off entirely. But that’s not what happened, and so here we are with another issue filled cover to cover with more fascinating entries on an array of Irish authors whose lives and works span the better part of three centuries.

I have to say, I’m grateful that we have The Green Book as a venue in which to serialise these entries, otherwise they might have temporarily languished as we continue to work towards (with luck) a collected single volume. It’s been a long road so far, and, just now passing the midway point, we’ve still a long way to go.

On the plus side, as I’m working on these entries, I’ve personally been learning so much, finding new connections, asking more questions, making lists of things I ought to read and explore. For me, our Guide is already doing what it’s supposed to do?

With that in mind, I hope you’ll enjoy this issue. Some big names in this one, including J. S. Le Fanu, Lafcadio Hearn, and Elizabeth Bowen; along with some names that might be less familiar, but I hope all the more thrilling for it.

I would also like to welcome some new contributors to this issue, including Janis Dawson, Paul Murray, and Nicola Darwood. We’ll be hearing more from each of them in future issues.

In the meantime, I hope you and your communities are staying safe, healthy, and happily reading.