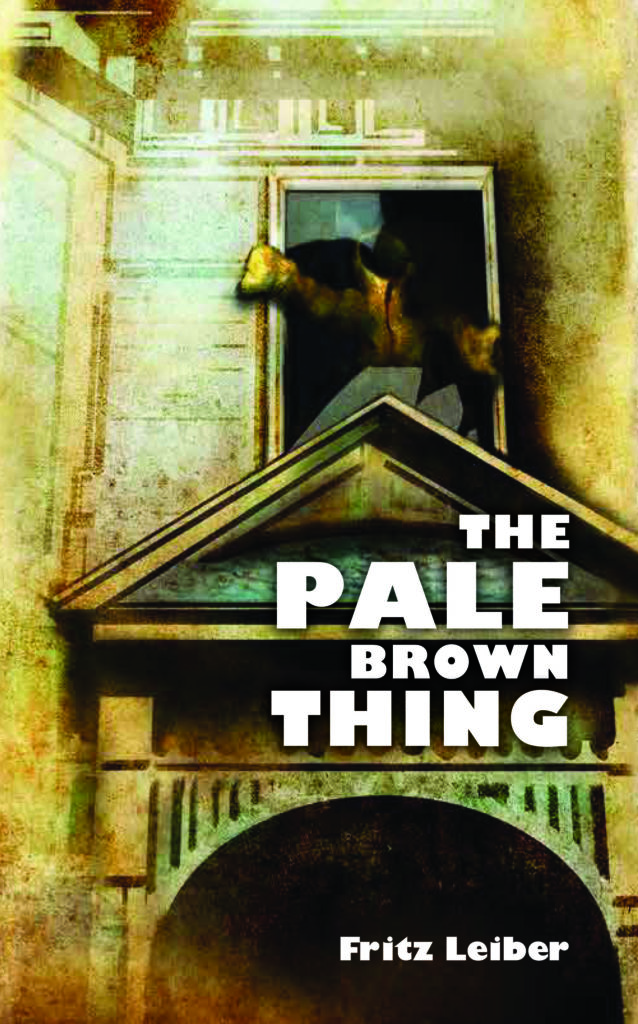 My earliest exposure to Fritz Leiber (1910-1992) was via the adventures of Fafhrd and the Grey Mouser as they fought and drank and caroused their way through Lankhmar (City of Sevenscore Thousand Smokes!) and realms beyond. I’ve still got my old Ace pocket paperback too, a prized item in my biblio-treasure hoard. Ill Met in Lankhmar was a thrilling tale set in some far-away land, but it wouldn’t be long before I discovered a work by Leiber that took its cue more from the real world – though was no less a stunning feat of imagination.

Few would contest Our Lady of Darkness‘s status as a modern classic. It picked up the World Fantasy Award for best novel of 1977, and rightfully so. It’s been described as both Jamesian and Lovecraftian – and it is, but it’s also wholly Leiber. Just as I had visited Lankhmar, becoming familiar with its dark alleys and byzantine guilds, so too would I visit San Francisco – or at least Leiber’s version of it – from 811 Geary Street to the Corona Heights; a city filled with occult conspiracies, horrifying “paramentals”, flamboyant poets, and an illustrious pedigree of pulp fiction past.

Our Lady of Darkness is a marvellous supernatural meta-fiction. A fantastical novel rooted in realism (it’s semi-autobiographical) with references to H.P. Lovecraft (with whom Leiber had corresponded), Ambrose Bierce, Jack London, George Sterling, and Clark Ashton Smith. To this real-world cast of characters Leiber added pulp fictioneer Franz Westen (a version of himself), the magnificently circumscribed Thibaut de Castries (author of the ultimate occult manifesto Megapolisomancy – how’s that for a title!), and of course Jaime Donaldus Byers . . . more on him in a moment.

Our Lady of Darkness remains one of my favourite novels, a carefully constructed and fully realised fictional world. So, yeah, you could say I’m a fan.

A few years back I learned that Our Lady of Darkness was originally published under a different title: The Pale Brown Thing, and not only that, but it was a different version than the novel I’d come to know and love. A shorter version. The Pale Brown Thing was originally published in the January and February 1977 issues of F&SF. You can see below that it was the cover story of the January issue as well. That painting there is by the great fantasy artist Ron Walotsky. 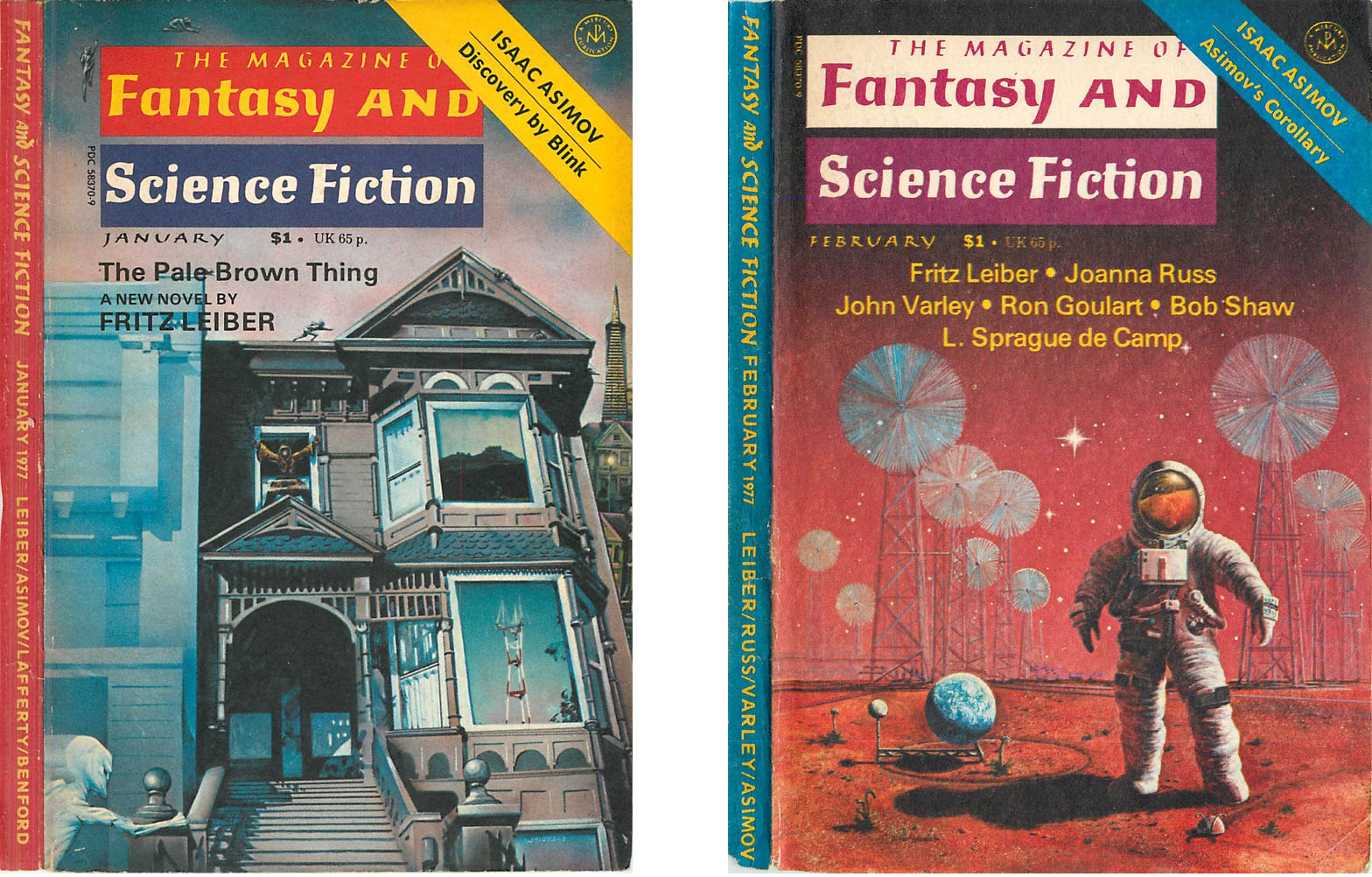 Anyway, I was intrigued. I wanted to read The Pale Brown Thing. And so I did, having tracked down those two issues of F&SF (because it’d never been reprinted anywhere else). Reading The Pale Brown Thing was a way to re-engage and re-discover Our Lady of Darkness. Familiar, yet different; more briskly paced. I came to understand that The Pale Brown Thing isn’t so much an earlier draft of the story as it is a different version. I later learned that Leiber felt “the two texts should be regarded as the same story told at different times. If Franz’s story is longer in Our Lady of Darkness, the reason is that he recalls more the second time he tells it.” And so both versions stand as valid tellings. John Howard expands on this idea in the afterword of the Swan River Press edition.

I love literary artefacts, multiple versions of the same story, and the idea of a published evolution of a story. It didn’t take long for me to realise I wanted to publish a new (first, I suppose!) edition of The Pale Brown Thing. However, I didn’t want to simply slap a cover on it and get it on the shelves. I wanted to explore the work and properly celebrate the book.

I found a number of great resources online, including:

The first people I spoke with about the project were John Howard and Jason Zerrillo. John is a long-time scholar of the weird and had often written about Leiber. His analysis of the evolution of the story from The Pale Brown Thing to Our Lady of Darkness was a natural choice for the afterword. Jason was also a fan of the story and eager to get to work on a cover, a new piece that would pay tribute to Walotsky (below). Jason also did an illustration of the Scholar’s Mistress for the the printed boards, but I’ll let you discover that horrifying visage on your own.

So then what about an introduction? Surely not a job for just anyone. Enter the Californian poet Donald Sidney-Fryer, who was introduced to me by Scott Connors. Sidney-Fryer was not only a good friend of Leiber back in his San Francisco days, but also counts Clark Ashton Smith as one of his early mentors. More importantly, though, he served as the inspiration for the flamboyant poet Jamie Donaldus Byers in both The Pale Brown Thing and Our Lady of Darkness. I couldn’t think of a better candidate to write an introduction . . . unless Thibaut de Castries decides to manifest himself.

Sidney-Fryer is an accomplished author whose poems and essays are available from Hippocampus Press – you should really check them out. He’s also lead a fascinating life, and I have to say I’m very much looking forward to his forthcoming autobiography, Hobgoblin Apollo.

In any case, Donaldo – which is how he signs his letters – was more than happy to write an introduction. He wrote about his friendship with Leiber and his place in the novel. My correspondence with Donaldo has been a privilege. It’s really for opportunities like this that I enjoy publishing so much. This on-going conversation with Donaldo is as important a part of creating this new edition of The Pale Brown Thing as is the text itself. He is a connection to ghosts of times past: Leiber to Lovecraft and Smith to Bierce. He is a portal to a classic work of fiction that I have enjoyed many times over the years, and I am grateful for the opportunity to explore again.

If you want to read a bit more about Donaldo, John Howard was kind enough to interview him about The Pale Brown Thing, his writing, and his friendship with Leiber for our website. You can read it here. You can also have a look at Alan Gullette’s website, a wonderful resource for all things Donald Sidney-Fryer – the Last of the Courtly Poets!

In the meantime, I hope you enjoy the new Swan River Press edition of Fritz Leiber’s The Pale Brown Thing. It will be out in July 2016.

Order a copy of The Pale Brown Thing here.